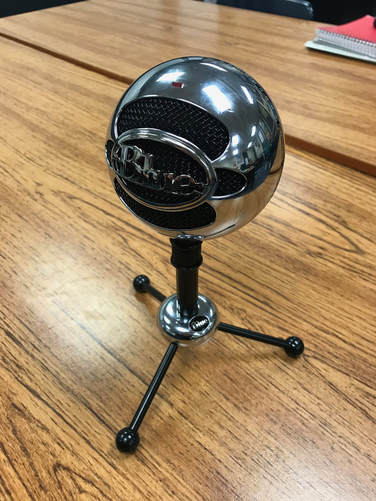 A microphone often used to record podcasts. (Photo by Madi Amundson)
By DJ Haasken
Published May 24, 2018

The Turkey Times brought in a whole new cast of characters to their team this year, as they do every year, and it was a pretty interesting bunch. The journalism advisor Jason Henke saw this as an opportunity to express local news in a way that is rapidly catching popularity in America: The podcast.

He assigned all the journalists that are a part of the Turkey Times team to make a podcast with the help of a group, thus producing two podcasts: “Food, Fashion, Furry Friends, and Funny Trends,” and “Good Podcasat.”

“FFFFFT” only lasted a single episode before folding. “Good Podcasat” produced four, with episode three being arguably the most popular. Episode three was full of strong opinion, witty comments, and of course provided a few laughs. It was also the first episode for a character who would later become a household name in the “Good Podcasat” realm and even was named an official host after episode three. He goes by the name of “Anonymous Source.”

I think it is safe to say the podcasts were a success for the Turkey Times. We’ll see if future Turkey Times teams can carry on the new and popular way to spread news.
Continue to No. 3 — Budget Cuts
Powered by