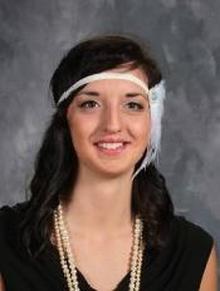 ​The track team is off to a slow start with their first two meets being cancelled due to the weather. Girls head coach Ava Carlson said that she is excited about this season and they have a great group of athletes. “Our numbers are low this year but we make up for it in hard work and dedication,” she said. The other coaches are Adam Carlson as boys head coach, and Mr. Jacobson and Nikki Fiske as junior high coaches.

“The great thing about track is everyone stands out,” Miller said. “The goal is to beat yourself; the ribbons and medals are just a sidebar.” Miller has set her goal on beating the school record in the shot put, which would beat her own throw from last year by 3 inches.

This is Ava Carlson’s seventh year as girls head coach. She also coached junior high track for nine years. She started running track in seventh grade and ran throughout high school. In college, Ava Carlson ran on the indoor and outdoor team at St. Cloud State University and that’s when she became interested in coaching.

When asked which team was going to be the hardest to beat, Carlson replied, “The focus is on beating a time, a distance or a height. It's about going farther, higher and running faster. Who you 'beat' is secondary.”

Aitkin will now open its season April 12 in McGregor.
Powered by