No-ah Way He Could Lose 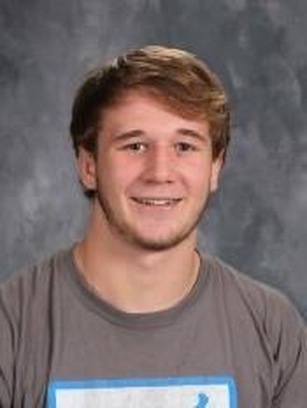 On Feb. 27, Aitkin senior Noah Landrus took first place at the Minnesota individual state wrestling tournament. Landrus wrestled Matthew Slater from Adrian in his first of four state matches. The match was fast paced and laden with takedowns, the final score being 18-7. “I took him down as many times as I could and stayed aggressive,” said Landrus. He then defeated Brady Mehr of Kimball by a score of 17-11, and Jacob Winjum of Caledonia with a score of 11-6, both in a similar fashion as his first match.
​
Then Landrus wrestled Alex Erpelding from Staples-Motley for the championship match. Landrus took down Erpelding in the first twenty seconds of the first period. He then let Erpelding up who answered with a takedown of his own, making the score at the end of the first period 3-3. Going into the second period, it was Erpelding’s choice, who decided to take the down position. In spite of Landrus’s best efforts to keep Erpelding down, he got up, receiving one point for escape. Landrus then took him down and let him up twice, making the score at the end of the second period 7-6. It was Landrus’ choice going into the third period.  Landrus chose down, with the hope that Erpelding would let him up. Instead, Erpelding stayed on top, and held Landrus down for the entire period. During the period, however, Erpelding was called for unsportsmanlike conduct, giving Landrus another point. “He kept digging his thumb into my nose and he had been warned three or four times for it,” recalled Landrus.

​The call was the only point in the period, bringing the final score of the championship match to 8-6. The championship victory was an appropriate ending to Landrus’ 43-1 senior season and his high school wrestling career. He intends to continue wrestling next year.
Powered by