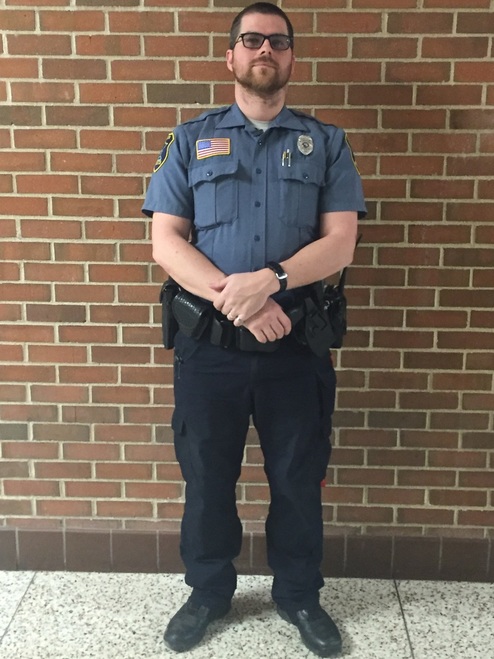 To some people, not only is Officer Byrnes a police officer but a friend
By Sampson Perrine
Posted March 29, 2016

Since December 1, Aitkin Police Officer Dustin Byrnes has been working in both the high school and Rippleside to make the schools safer and prevent bad behavior. Officer Byrnes spends time in the hallways and cafeteria and tries to get acquainted with students and staff to get to know them better. Having an officer in the building seems to make a positive impact on students’ behavior. “It’s gotten a lot of people to take a second thought about what they’re doing,” said Byrnes. “There are things that haven’t happened because I’m here.”
​
Although the officer just being in the school stops some bad behavior, there are still issues that need to be dealt with. Officer Byrnes reported that he’s dealt with everything from tobacco violations, to harassing and threatening text messages. He went on to say that he believes it is best to get to know students and try to resolve issues before they become behavior problems, saying “prevention is always better.”

Along with spending time at the high school, Officer Byrnes teaches D.A.R.E at Rippleside Elementary and deals with any problems that might come up. Even though he may seem like a very serious guy, Officer Dustin Byrnes says that “Every once in awhile I let my weird out, and you have to be ready for it, because it doesn’t last long.”

Throughout his time at the school this year, Officer Byrnes said that he’s seen a change in how people react to him being in the hallways. “It’s become less about me being a police officer and more about me being a person,” he said.

​Officer Byrnes has enjoyed his time at the school so far and has become another friendly face at Aitkin High School. “I do think my being in the school has been a positive thing, and is beneficial to both sides,” said Byrnes
Powered by