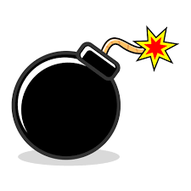 During a basketball game Jan. 26, a young boy found a threat in the bathroom stall near where the game was going on. When he went to find an adult, they went to the bathroom to realize that it was a bomb threat. They called the police into the school, who then searched throughout the whole school that night.

The police went into the school early the next morning to sweep through just in case something had been brought in after they left. School went on as scheduled and they stayed throughout the day to watch for any strange activity. There were cops surrounding the hallways, watching people walk in the doors, looking at bags that were large enough to fit anything, and also watching people as they went to their lockers.

​On Wednesday morning the students and the staff were called into an assembly to talk about the threat. Superintendent Bernie Novak talked about the two messages they found in the bathroom and how the police had sweeped through the school twice. He said that they had not found anything suspicious and that it was safe to attend classes.
Powered by