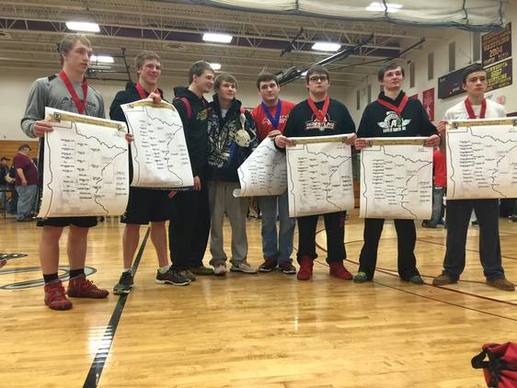 On Feb. 19-20 the Aitkin Wrestling team attended the individual sections in Cass Lake for the opportunity to continue on to state. This year there were eight members of the team that advanced to state. These members were Noah Landrus, Jerod Novak, Silas Berg, Tyler Bare, Jake Pederson, Kenny Hesse, Kyle Lynn, and Michael Roth.

Jerod Novak wrestled at 152. He went into the competition not seeded. He won his first match by a 10-4 decision, which allowed him to move forward into the quarterfinals. In his quarterfinals match, he won by a 5-2 decision and went on to wrestle in the semifinals. His semi-finals match was a match everyone in the stadium was looking forward to as he was going to wrestle long-time section opponent No. 3-seeded Kolton Eischens. Jerod ended up winning a 3-2 decision, moving him on to the finals match, where he ended up coming up short, losing by a 3-1 decision, getting him second place.

Sending eight team members to the state tournament is a record for Aitkin High School. With eight people attending, only two of the team members were able to advance onto the finals. There hasn’t been a champion wrestler from Aitkin since 1985. This year Noah Landrus won the state championship at 160 pounds.
Powered by