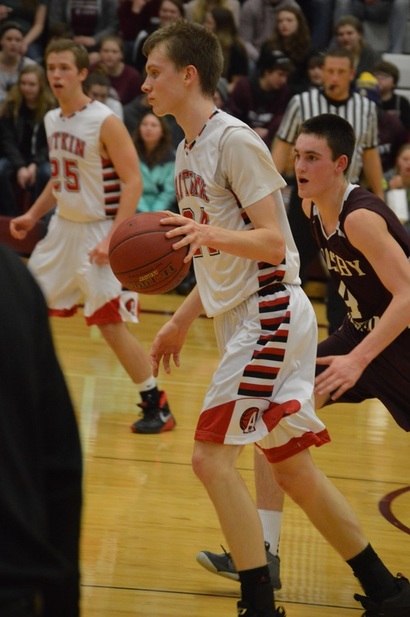 Nathan put up 1,095 career points for the Gobblers
By Franklin Real
Posted March 4, 2016

Recently Aitkin High School's very own Nathan Davies has reached 1,000 points scored in his high school basketball career. Many athletes strive towards this momentous occasion but only a select few are able to reach it. Nathan attributes his success to “Hard work and the support of my friends and family,” saying that “Without people like my father, coach Moss, and all my teammates, there's no way I could have made it where I am today.”

Nathan played point for the Gobblers this year, racking up a total of 1,095 points and 108 assists for his career. He also set a new precedent, averaging the highest points per game of any Aitkin Basketball player in the school’s history. Though it’s not about the personal accolades for this young athlete, when asked if there had been any change to the game plan as he neared the 1,000 point mark he responded, “No way, it’s always about the team. Sure, scoring 1,000 was nice but I’d never put my scoring before the team getting the win.” The Gobblers had an exciting year full of ups and downs ending at 11-16. They were able to string together four straight wins at home to end the season before going into section play and losing to the Crosby Rangers 69-39.

Nathan not only excels on the court but in the classroom as well, where he boasts a near perfect 4.2 weighted gpa and is a member of National Honor Society. He also is a member of Knowledge Bowl, Chem Club, and Jazz Band, where he applies the same work ethic and dogged determination that serves him so well in basketball. He plans to attend Macalester College where he will be playing for the basketball team while working towards a degree in Physics.
Powered by