Landrus earns Athlete of the Year 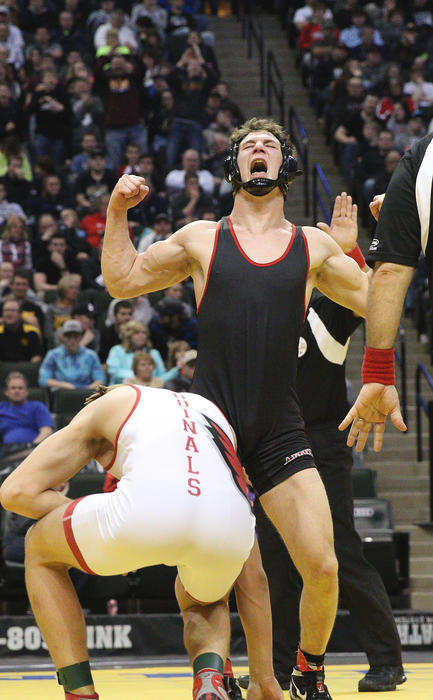 This year’s Aitkin High School Athlete of the Year is senior Noah Landrus. This year Noah was a captain for the Aitkin wrestling team. “He was very good leader on and off the mat,” said coach Greg Hills. Landrus’ main accomplishment happened on February 27 when he did something that hadn’t been done at AHS for 31 years. Noah was an individual wrestling state champion.

Noah got into wrestling when his step-dad showed him some moves on a mat that he had at his house and his dad started to bring him to tournaments around the state before he was even in wrestling. The journey to get to where he wanted was hard. “Sometimes I wanted to quit and sometimes it was really hard, but thanks to my coaches I was able to finish strong,” Landrus said. “I finished where I wanted to.”

Many people agree that Noah is a hard worker and dedicates himself to the sport he loves, and many agree that he deserves the title of Athlete of the Year. “Noah deserves athlete of the year because he is a humble person and that’s why he succeeded as much as he did,” Hills said. These thoughts were echoed by coach Shawn Hankel. “Noah does deserve to be chosen as the athlete of the year,” Hankel said. “He has accomplished a task that has not been done in Aitkin High School for over 30 years.”

His classmates also agree. “Noah is such a hard-working person and never boasts about his accomplishments,” Shellby Fisher said. “He pushed himself to become who he is today and influences other wrestlers to dedicate yourself at every practice and match.”

Last year Noah finished in fourth place at the state tournament. Right out of the gates this year Noah was ranked first in the state. “I liked having the target on my back,” he said. At the end of the year Noah finished the season with a record of 43-1, one of those wins being the state championship. During the season Noah broke the drought of Aitkin not having a state champion for 31 years and he also broke the school record for most takedowns in a single season.

Noah has more plans for wrestling outside of high school. He is planning on going to wrestle for Itasca Community College at 165 pounds. “I think he will do good because he is mentally ready and he is fearless,” Hills said. After wrestling in college, Noah hopes to someday become a coach.

​Hankel heard something he will never forget after Noah won the state title. Noah went up to Coach Hills and said, “We did it,” and Hills responded, “No Noah, you did it.” And he finally accomplished a goal forever in the making.
Powered by