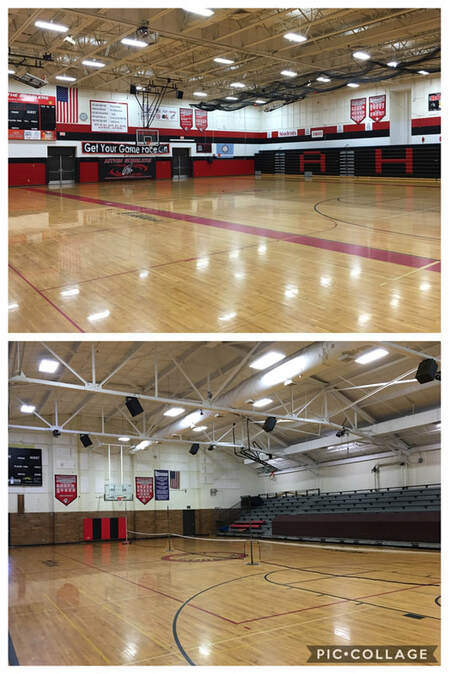 At Aitkin High School during our winter season and early in our spring season gym space is in high demand. We have student-athletes practicing after school as late as nine o'clock at night and starting as early as six o'clock in the morning. A lot of our teams, especially at the junior high, get their gym time cut because there is a higher demand at the varsity level for the gym. This is a big issue here at the high school and it causes a lot of problems between programs, for the athletic director, for the coaches and for the athletes themselves.

One of the big problems that is caused by the lack of gym space is how it affects our sports programs. The lack of gym space decreases the practices for each sport. Instead of having a solid two-hour practice like other programs around our area, we get cut to an hour and a half to even maybe just an hour. With having two varsity basketball programs and two junior high programs, practices get pushed to six o'clock in the morning or pushed to nine o'clock at night to get a practice in. The early mornings and late nights affect our student-athletes both in competition and in the classroom.

This lack of gym space affects how competitive our teams can be with other schools around our area. The facts are that we have some of the poorest facilities around our area in comparison to the amount of students in our school. Our rival, Crosby, has 50 less kids than us but three gyms compared to our two. A little farther away in Mora, there are about 10 gyms with seven of them in a wellness center that is connected to their elementary school and three gyms in their high school. The school that shows how far behind we are is around 30 miles away in the town of McGregor. McGregor has a total of three gymnasium for 135 kids grades 9-12. All this shows that Aitkin needs to step it up and give their student athletes a better chance for success.

The coaches at Aitkin high school believe there is an issue with the lack of gym space. Head girls basketball coach Rob William said, “We are constantly playing catch up with teams around us both in our conference and section. When Crosby has five courts right off of their commons at the high school and Pequot has six courts, they have more time and court space available. This is a common theme which equates to our athletes getting less practice time and coaching opportunities.”

Head wrestling coach Larry Liljenquist said, “It affects our ability to have home events. Due to the lack of space, wrestling competes with other sports for home event space in the evenings.”

You can often see the dancers practicing in the halls or cafeteria because of the lack of space. “The cafeteria is not quite a large enough space for the dance team and the concrete floors are dangerous for our athletes,” head dance coach Kate Schmaltz said. “We see a lot of injuries to ankles, knees and hips and we have to be very cautious about the training plans we compile for our athletes. It's also difficult with the lack of standard gym floor lines. Our team uses these lines for our formations (which is 20% of our score). This past season, I came in on a Sunday to put mock lines on the cafeteria floor just so the girls would have something to use. The team doesn't fit for some of our formations so we have to "fake" it, our kickline being a great example. I also cannot get up high enough to see the formations on the floor as I could using the bleachers in the gym.”

The referendum of 2015 was completely shut down by the voters of the Aitkin School District. This would have been able to fix this problem by building a new facility on the land the district purchased on the south side of town. The referendum would have cost taxpayers that live in a $150,000 home $408 a year for the 20 year term on the bond. The bond amount would have been a total of $68,500,000 for the 20 year bond. This referendum would have increased everyone's taxes like the residential homestead, commercial/industrial, agricultural homestead, agricultural non-homestead, and seasonal recreational.

After the referendum failed the district choose to levy the Local Optional Revenue provided by the state of Minnesota in 2013. The Aitkin School Board had removed it for several years until December 2017. The revenue was in place for the 2018-2019 school year. This costs taxpayers that live in $150,000 home $150 a year. This Local Optional Revenue would bring in a total of $796,604 a year. This would only increase residential homestead and commercial/industrial. This does not increase the taxpayers that own agricultural homestead, agricultural non-homestead, and seasonal recreational.