The history of the Turkey Times 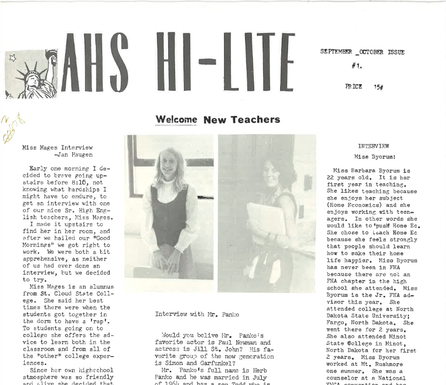 There are a lot of questions surrounding the origins of Turkey Times, even some by the reporters themselves. Today, some of those many questions will be answered. Jason Henke currently runs the Turkey Times. This is his twelfth year, starting in 2005 and leading up to the current date. (There was one year during this time that the school did not offer Journalism.)

Mr. Henke has a long list of credentials that make him the right man for the job. Starting off dating all the way back to his elementary newspaper: The Wildcat Press. During his high school years he worked for the Magnet and during his college years wrote freelance work for the Park Bugle. After college, he moved around frequently and had full time work for the Owatonna People’s Press writing sports, The Faribault Daily News writing cops, courts, and some sports, the Brainerd Dispatch writing sports, school stories, and copy editing, the Bemidji Pioneer writing sports and copy editor, and lastly freelance work for the St. Cloud Times. Mr. Henke has been writing news for roughly 10 years. He also has a degree in Journalism and Mass Communication from the University of Minnesota.

Mr. Henke has not always run the Turkey Times. It has been run by many Teachers before him, Mr. Jacob Jaskowiak being one of them. Turkey Times was not always called Turkey Times either, just some of the names are as follows: Hi-Lite, Gobbler Gazette, Gobble Gobble Gobble, Gobble Cubed, and Beyond Black and White. The newspaper predates the year 1970 as this was the oldest issue Mr. Henke has seen. The paper was not always on the Internet as all could expect, but by the year 2014, the paper was completely on the Internet. Beforehand, every 2-3 weeks, students would hand out paper copies at the end of the school day. They were completely free.

When presented the idea of a full year class if possible, Mr. Henke with an extra amount of energy, jumped up and said, “Absolutely, I think that would be one of the best things to do. It’s kind of awkward to start in the middle of the year. It’s nice to have that continuity.” He believes that this class is a great benefit to aspiring journalists. “They are able to write for an audience and be judged by their peers,” he said. “Writing is an essential tool and the best way for a writer to get better is to write.” When asked what makes a good journalist he said, “Willingness to go the extra mile, to fully cover a story. They need to find out all the info that a reader would possibly like to know and present it in an understandable way.”

Hopefully, Turkey Times will still have many years to come and be the first and foremost primary source of school news for Aitkin High School. Regards, The Turkey Times Reporters.
Powered by