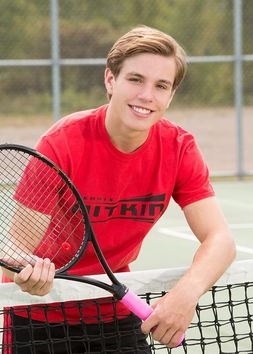 Captain Josh Carlberg posing in the tennis court.
By Tom Petersen
Published May 5, 2017

The Aitkin High School boys tennis team headed to Virginia on April 4.  They always look forward to playing Virginia because of the tough competition and indoor facilities.  Since it was Aitkin’s first match, the team really didn’t know what to expect.  Aitkin and the team decided they would go out and give it their all on the court, but if they lost they would not hang their heads. The results of the matches were not as important as the match play experience that the Virginia Blue Devils had to offer.

The tournament moved on to doubles with Jacob Houghton and David Curtiss starting off the first match. They struggled at the beginning and lost the first set, but came back in the last two and came out with the win. The double matches went onto the third round of doubles with Jaren Johnson and James Much coming out with a win and the team was shocked.

The single matches went on with Joel Fremling coming out with Aitkin’s second singles win, tying it up for the singles 2-2.

Josh Carlberg was the deciding match to determine if Aitkin would win or lose. Carlberg’s match was against Connor Croft, an opponent he lost to last year.  At first Josh struggled, but as the match progressed to the end of the first set he would win a crucial tiebreaker 7-5. Josh would continue to battle with Connor Croft and would eventually come out on top with a 6-4 win in the second set.

The Gobblers ended up squeaking out a historic 4-3 win against Virginia, the first time Aitkin has ever defeated the Blue Devils.

​The captains and coaches talked the following day about how they came into the tournament, all feeling a little nervous from knowing Virginia's background in tennis against Aitkin.

“We tried to keep that out of our heads but we were all struggling at warm ups,” Carlberg said. “But we gave it our all and at the end of the day came out with a “W” that was very well respectfully earned.”
Powered by