Profile: Cody Davies is fired up 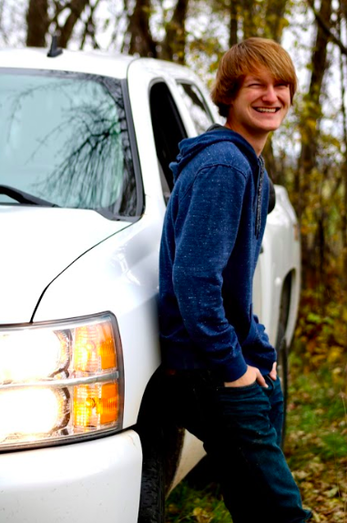 Cody Davies is someone who you can’t miss while being in the same room. Cody is a sarcastic and witty guy. There isn’t a time where Cody doesn’t miss a shot at being sarcastic or making a witty comeback. Cody’s mom is Kim Davies and his father is Gene Davies. He has a twin sister Kaija, an older sister Ann and an older brother Eric.

Cody is a senior at Aitkin High. His favorite classes are the shop classes. Cody enjoys shop classes because it is something he actually enjoys doing. He has made many memories that he will remember for the rest of his life. “My favorite memory would be starting a fire in the shop class with Zach Richters,” Cody said.

Cody loves hanging out with friends, whether it’s playing XBox together or hunting or fishing. “There are so many memories with Cody,” Carter Dox said, “picking one is hard but it would have to be a CO2 paintball can exploding in Cody's room while playing XBox,” Carter said with a smile and laughter.

Fall is Cody's favorite season. “I love it because it’s not hot and not cold,” he explained. In fall, Cody loves to shoot ducks and go deer hunting. This last deer hunting season Cody shot an 8 point buck with a drop tine. Cody is an avid hunter and fisherman so he takes every chance he can get to go out. Cody loves waterfowl hunting, deer hunting and fishing for walleyes with his friends and family. Cody shot his first deer when he was only 10 years old. The first day out he shot a 4 point buck and the next day he shot a 6-pointer.

Cody's plan for the future is attending a school to become an electrician or doing something in the trades. Cody isn’t sure where he will be attending, but wants to attend a college close to home. Cody’s inspirational quote is from Forrest Gump, who says, “Life is like a box of chocolates, you never know what you’re gonna get.”
Powered by