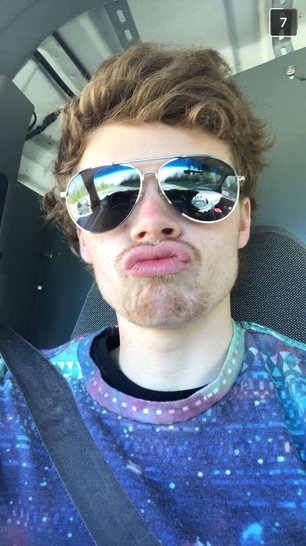 Lucas Wickstom in his natural habitat
By Tom Petersen
Published May 25, 2017

Lucas Wickstrom is just your typical outlaw from the swamps of Palisade. Coming in at about 130 pounds and looking as good as a man who bathes in mud can, he is a man of many wonders. Lucas is the co-president of Aitkin High School’s Peer Leaders program. He was also a 2017 class officer, and an off and on member of the student council.

When growing up young Lucas went to school at Palisade Elementary until fifth grade when he had to move to Aitkin. The Palisade School was closed shortly after, leaving a never-healing mark on his heart. He was a shy man at first, but began to get used to the kids from Aitkin. Lucas was always known for being one of the smartest kids in the grade and always had good grades, too. Lucas likes to go hunting, fishing, and just hang out with friends in his free time in the summer. He works at the Palisade One Stop where you can find all your needs at a nifty price. Lucas then started working at the Aitkin Rental Center in the summer of his 11th grade year and still helps out there occasionally.

Lucas has plans after high school to go to the College of St. Scholastica for business. He plans to room with Sam Peterson. Lucas is also starting a new job this summer going around the state painting gas stations. Lucas said, “I wanted a job to travel the state and not be going to the same place everyday like a regular job. I just want to get out of Aitkin and start a new life.”

Lucas is known in Aitkin as the “lady killer” and currently is dating Jillian McDonald and plans on taking her to Paris this summer to propose. He hopes to start a family, and then he said he will follow up on his senior quote. Lucas also likes to visit the body shop at least once a month. He has had his license for a little over two years and has hit one bear, two deer, a coyote, a fox, and a panda when he was in China this last summer. Lucas is a man of many wonders and a man that will always be in our hearts and will never be forgotten by family and friends.
Powered by