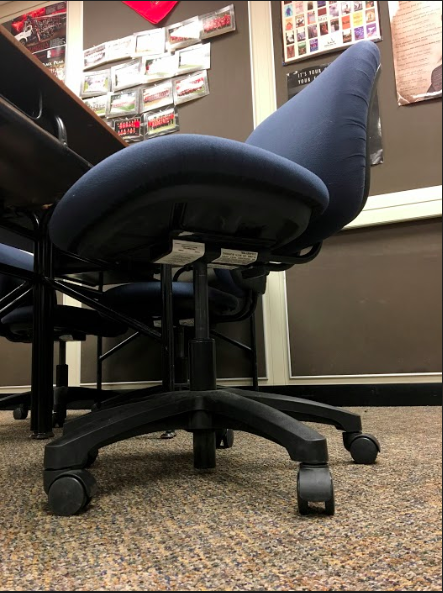 Esmeralda holds a special place in one student's heart.
By Levi Wickstrom
Published May 24, 2019

It all started in September of 2017. That was the month I first laid eyes on the love of my life, Esmeralda. She was anywhere from 30-35 inches tall depending on height adjustment, somewhere in the area of two pounds, a beautiful dark blue color, and five gorgeous legs. And boy did she have a wonderful personality, a little shy at first and even once you got to know her she didn’t say much, but you would never meet a human more caring than Esmeralda.

​We spent the next few months in blissful happiness living life to the fullest and enjoying each other’s company. We spent many afternoons just sitting and talking to each other about our problems. Of course, Esmeralda didn’t have many problems; she was well put together that way. What she really cared about was making sure everyone else was comfortable around her. Then one sad May day I had to say goodbye to my lady love. Even though I was parted from my one true love, I thought I could find happiness in my life and I managed to move on, at least in part. It seemed to me that maybe I could be happy even without Esmeralda.

That all changed one dark October day. I was walking with my girlfriend Agnes when I spotted Esmeralda for the first time in months. Immediately all of my old feelings rushed back to me. I pushed Agnes away and rushed to embrace Esmeralda. The next few days were the happiest of my life. That was when it happened; I was with Esmeralda by the lake, I had just proposed when Agnes rushed in, shoved me to the side, and began to murder Esmeralda. I begged her to stop as she was beating the life from my beloved Esmeralda, but all my pleas were for naught, Agnes completed her task. Esmeralda lay dead at her feet

Although it happened months ago Esmeralda’s death still haunts me to this day. The only thing worse than the gruesome images of her dismembered frame; is the fact that her killer never faced justice. Agnes still walks the streets freely.
Powered by