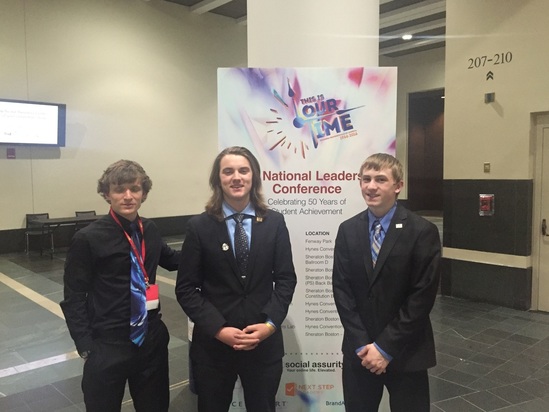 Three Aitkin High School students and one teacher expanded their views on the nation as they traveled to Boston, Mass. for BPA Nationals. As senior Hunter Conway and sophomores Jacob McCormick and Tucker Schwartz boarded the plane, they were excited about their adventure to come.

Tucker Schwartz, placing first at state in computer security, landed himself in 19th place at nationals. “I placed nicely and feel like I learned a lot on the trip so to me that is the biggest success,” he said.

Jacob McCormick participated in PC Servicing and troubleshooting  which he placed fourth in at state. Competing against 100 other high school students at nationals, McCormick ended up in the upper half in 41st place. “I thought for being a sophomore from small town Aitkin I did pretty good,” McCormick said.

Hunter Conway competed in the computer network technology event. At state Conway had placed seventh, but due to two other competitors not being able to go, Conway was on his way to nationals. Like both of the other boys, Conway had finished in the top fifty of his event, placing 37th. “I put in a lot of hard work and effort," Conway said. "My event wasn't a team event so I had to study and learn about it on my own accord.”

The trio plus Mr. Miller, who is the BPA supervisor, did more than just compete for the five days they were in Boston. The boys saw historical attractions like the site of the Boston Massacre and Bunker HIll, made friends, and took advantage of other opportunities presented to them. “I’d have to say my favorite part of the trip was Boston itself," Conway said. "I really enjoyed seeing all the historical sites there and going to see MIT and Harvard.”

The boys were able to afford this trip by various organizations in the community donating them money and through fundraising. The school also offered a loan for money that the boys would have to pay back. “It was a blast," Said Schwartz. "Just getting to know people from all over the country and learning, listening, watching. It was worth it. Just imagine it as going to a place where everyone shares the same interests as you and everyone wants to be there. It's just completely worth it.”
Powered by