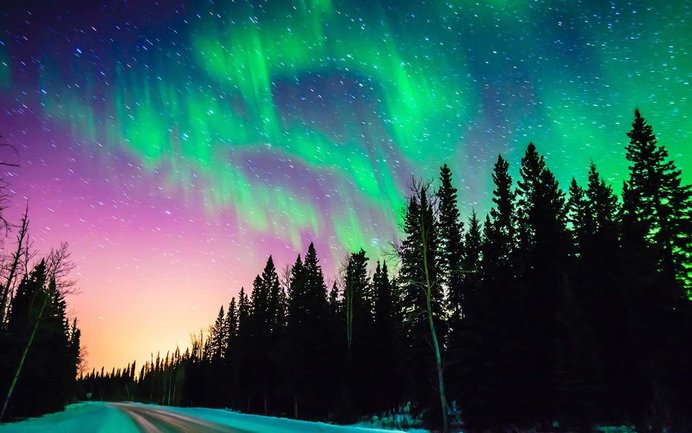 Picture of Northern Lights in Alaska from Google
By Kassidy Pietz
Published May 21, 2018

When I was halfway through my kindergarten year, I got some exciting news from my parents that we were going to be moving to Alaska. My mom had been looking for her job in a different place for months and she finally found three in Alaska in Nome, Unalaska, and Juneau. My parents decided that neither Unalaska nor Nome were really where they wanted to be, so they settled on Juneau and went to visit it a few weeks later to see if they liked it enough to call it their new home. The weekend they were there, there was record-setting rainfall (temperate rainforest) but they loved it anyways. I didn’t really know where Alaska was, but from what my brother said it was going to be great. We stayed up late at night in our bunk beds talking about all the igloos, moose, and polar bears we would see there.

A few months later we started our trek there. My mom flew up right away so she could start her new job on time. My brother, dad, and I drove there from Minnesota, which was a very long trip for us and I’m sure an even longer trip for my dad having to deal with us, bless his heart. We finally got there, got settled in, and began our new lives in Juneau. There were not nearly as many (or any) igloos or polar bears there, but we did see a few moose and a whole lot of beauty in the mountains and the ocean. In the next years we grew into Alaskan children that ran around with no shoes even when it was pouring rain, swam in the ocean without wetsuits in the fall even when the water was 40 degrees, and found a love and a passion for climbing mountains to see the sunrise in the early morning or the sunset late at night. We learned that some of the most fun memories were made outside, camping, fishing, and just playing. Growing up there has truly made me who I am today.
​
In Alaska, we got to experience so many things that most children don’t get to experience and pretty much everything was different there than it is down in the lower 48. For example, for all of our sports and activities we had to travel to different cities to play because there was only two middle schools and two high schools in our city. The only way to get out of Juneau was by boat or plane, so if you were going to play another team with your sports team or were going to a music festival you had to get on a ferry boat or a plane and travel that way. Our longest boat ride was 32 hours to Ketchikan, but the shorter ones were only usually between eight and 18 hours. We also got adjusted to the short summer nights and the long winter nights. Our days were not as dramatic as they are up in northern Alaska, but we still had very long summer days where it would stay light until midnight and then be dusky until 3 a.m. when the sun rose again, and long winter days where it would be dark when we went to school and dark when we got home. This took awhile to get used to, but honestly after moving back to Aitkin it was kind of weird to me to have it any other way than I had grown up experiencing.

I would not have liked to grow up any other way than we did. Years later, I found out that my mom wanted us to move because Aitkin was too small. It was too closed-minded. And I had the same kindergarten teacher as she did (love Ms. Femling, but just too small). I think my parents made the right choice in moving us there, even though we missed our friends and family especially. We got to experience so many great opportunities and experiences that I never would have experienced if we had stayed in Minnesota and being in such a culturally diverse area made me a very open-minded and accepting person, which I also would have never probably experienced to the same degree if we stayed in Aitkin.
Powered by