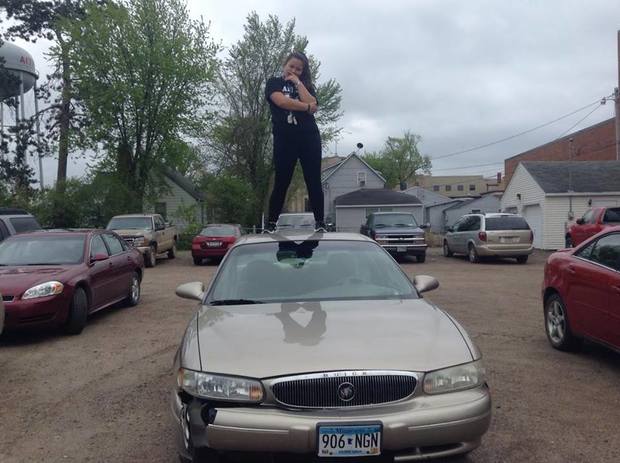 Angel Beaufeaux poses atop "Buie."
By Sarah Johnson
Posted May 18, 2016

The honor of heap of the week has been bestowed upon a car named "Buie." Buie is a 2000 Buick Century owned by our very own Angel Beaufeaux. She has had Buie for one year, but he has had quite a few adventures. He is missing part of the bumper, the gas gauge does not work, you have to guess which gear you are in, and he likes to randomly stop running while being driven.
​
Buie is unique because he has romantic feelings for Brady Taylor and a burning hatred for DJ Haasken. One adventure that resulted in the loss of the front bumper was when Angel and Grace decided to go eat food with DJ and Hunter. On the way into town Angel and Grace hit a patch of black ice throwing them violently into the ditch. They hit a rock and that was the end of the front bumper.

Another example of shenanigans with Buie was when Angel, Grace, Brady, and DJ were off again to get food. The only set of keys were accidentally locked in the trunk and no one knew how to open it. Many people, including coach Moss, Nathan Davies, and Abel Palkie were flagged down to provide some assistance but to no avail. The trunk button was eventually located in the glove box.

Buie may not be the perfect car and he might not be the prettiest in the lot, but all his imperfections are just battle scars from all his memories. Even after hitting deer, rocks, and going into the ditch, Buie still has a lot of fight left in him even if he likes to stop while driving sometimes. That doesn’t stop Angel’s love for Buie though and they will continue to have adventures together.
Powered by