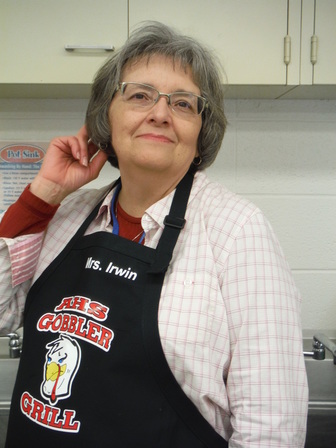 Mrs. Irwin put in her resignation on Friday, May 1. As many know, Mr. Irwin had prostate cancer, which he seemed to have fought off, but it came back and has spread rapidly. The cancer spread to his bones and is in his skull, top and bottom of his spine, his right arm, and the back of his neck. Mr. and Mrs. Irwin found out some news a couple of weeks ago that Mr. Irwin’s radiation is not working. Instead of three days a week for his chemo treatments, it is now four.

Mrs. Irwin went through a lot this year trying to keep her husband healthy, all the trips to the cities, finding people to go check on Mr. Irwin throughout the day, and all the stress with her classes, especially restauraunt.

Mrs. Irwin had originally planned to retire at the end of this school year, but a major conflict came up in school. She finally reached her breaking point.

“How do you sum up such an amazing person? She is my second grandma. She's so groovy and loves life to the fullest. I have never met anyone with a bigger heart. She loves us like her own. She does anything and everything to make you giggle and smile. We will miss her dearly and won't ever forget her snarls that were always a surprising action, but it will be dearly missed.” said Mariah Trotter. The restaurant class this year has been a roller coaster of emotions. After everything though, the class has become as close as a family.

Mr. and Mrs. Irwin are going to be greatly missed, and forever in all our hearts.
Powered by