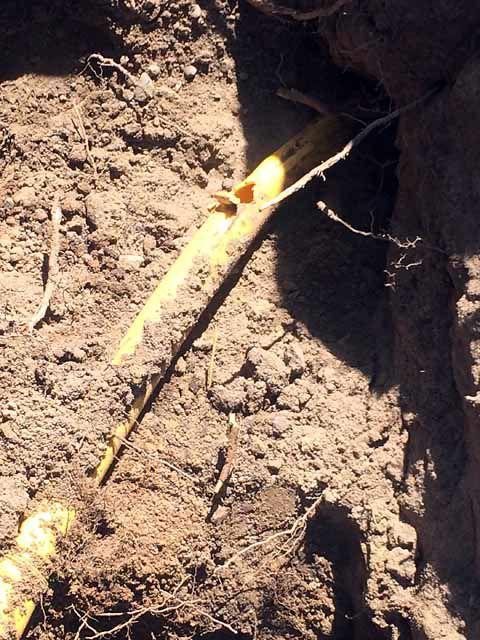 Gas line broken. (Photo submitted by the city of Aitkin)
By Logan Speed
Published on May 17, 2018

On Wednesday, the construction workers who were working on the Aitkin courthouse building remodeling project hit a snag, (pun intended) while digging trenches for new electrical lines. The trencher punched a hole in the city’s two inch main line for natural gas, causing a deadly situation if the gas was ignited, because it was fully pressurized. The result of striking this gas line was the line releasing natural gas into the atmosphere around the worksite and town, including around the county courthouse and toward the high school.

In an communications sent out to faculty and parents on the day of the gas leak at 9:43 am, Superintendent Mr. Brad Kelvington said, “Today around 8:45 a.m. we received notification that a gas line was hit across 210 by the Aitkin County building project. For precautionary reasons and under police guidance we evacuated all students and staff to 4th street on the north side of the high school. Police and administration did a sweep of the school to ensure all staff and students had evacuated. Jim Bright and our custodians shut down all fresh air intakes. Students waited cooperatively while the gas leak was capped. Once the leak was capped, representatives from Minnesota Energy did a walkthrough of the High School with a meter to make sure no gas had entered or remained in our building. At 9:15 we received notification that all was clear and it was safe to return to the building. Students were back in class around 9:25 a.m.”

He also included, “I would like to thank our students and staff for the orderly way in which they followed evacuation directions, waited patiently, and returned to the building and learning safely.”

Within 24 minutes of the break, the broken gas line was fixed by Aitkin county Public Utilities workers. It would not have been possible to fix the line as quickly as they did without all the support from the community, such as the Aitkin Fire Department along with traffic control, coordination, and personnel support from Aitkin Police Department, Aitkin County Sheriff’s Office, and the Minnesota State Patrol, all of which responded to the scene accordingly and promptly. The quick response from all of these groups saved the lives of students, staff, public workers, and residents of the city of Aitkin.

The pipe was pressurized at distribution levels, which municipally range from 25 PSI to 45 PSI (pounds-per-square-inch). The line fed Aitkin High School and several city streets. The line has since been pressurized and tested. The dig site has been covered once again.
Powered by