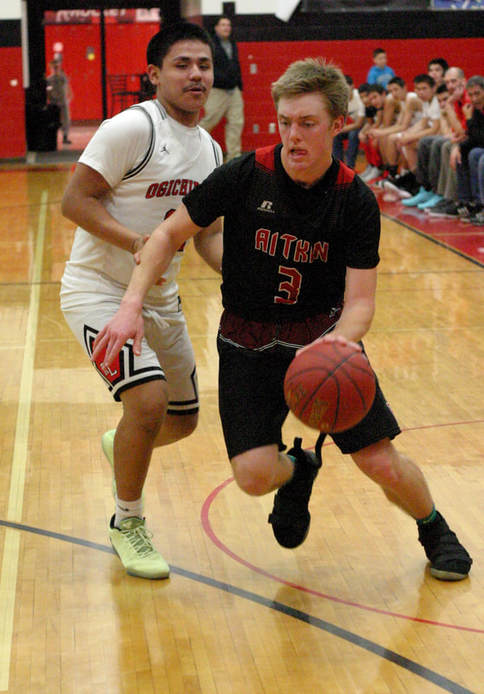 D.J. dribbles down the court against Red Lake earlier this season. (Photo by Henk)
By DJ Haasken
Published May 16, 2018

I know it’s a game. I’m not going to bore you with the cliche “(insert sport here) isn’t just a game, it’s a lifestyle” quotes, or anything sappy like that. I just need to write about how much a simple game as simple as putting a ball in a hole has changed my life for the better.

Let me start you with a little background. My absolute favorite sport when I was little was hockey, no question about it. Now, if you have never played organized hockey or even spent time with any anyone who did, you wouldn’t know that young hockey players make fun of the kids who play basketball because “They score 100 points a game, nobody even plays defense” and “Hockey players are way tougher than basketball players.” And I am not afraid to say I took part in the smack talk between sports.

It wasn’t until sixth grade when my life would be completely flipped around. A kid moved to our school by the name of Hunter Moe. He was from Pequot Lakes, whose basketball program was notorious for repeatedly beating everyone in the area by huge margins. We somehow became instant friends despite our differences in sports. I didn’t own a basketball. I didn’t own a basketball hoop. I couldn’t name a single professional basketball player, and as I said before I routinely made fun of basketball. As far as I can remember before the spring of 2012 I had never actually dribbled or shot a basketball. So there me and my ragtag group of friends sat at the blacktop of Rippleside Elementary putting together a pretty pathetic showing of basketball with the exception  of this kid from the basketball powerhouse by the name of Moe. What do you do if you’re me?

The sixth grader that I was, said, “Man, I am really awful as this game. I’d better get a ball and start playing ... Just so I’m good enough to play on the blacktop at least.” So that’s what I did. My dad must’ve thought I was crazy asking for a basketball when I had never even showed a mild interest in playing before. So I was gifted a ball and an old basketball hoop to boot. I began playing here and there in my free time just so I was good enough to not be laughed at on the playground. It wasn’t until seventh grade that I had to make a choice that would ultimately change everything for me. I decided to leave my hockey obsession to pursue basketball. A thought that never would’ve even remotely crossed my mind a year ago. Seventh grade basketball was rough, as you would imagine when making a polar opposite swap of sports, but I was upset. I got right to work, working all summer with the head varsity coach at the time who really saw potential in me and really gave me the confidence and the drive to get better, and I credit almost everything I do on the basketball floor to him.

Eighth grade passes by and I’ve just begun to really shoot the three-pointer (which would turn out to be a key attribute to the player I would later become). Ninth grade comes up and I’m just happy to make the C-squad team. I’ve always said this was the most important year to my career because the coach I had was so good. Caleb Baker from Crosby-Ironton was fresh out of high school and one of the best players in the area in his time. One bond I’ll always share with some of the guys on that team is how much we ran, conditioned and how hard he always pushed us. To this day there is a soft spot in my heart for the C-squad team every year because of how important that year was to me. Tenth grade comes by and I’m sure I’ve got a shot at making the varsity team. I didn’t make it. That year pushed me to a completely different level and really motivated me to show what I had. By my junior year I was starting on varsity but I didn’t feel comfortable in my own skin quite yet so I often found myself floating by. By my senior year I hit the stride that I knew I could hit. At any given point throughout the course of any given game that year I was confident I was the best player on the floor for either team. I ended up averaging 16.5 points and 6 rebounds per game that year. I also was named to the all-area team and was an all-conference selection. Short of my 25 points per game average and Mid-State Conference MVP goal I set for myself before the season.

After all was said and done with my high school career I can say I am completely satisfied with how things went, from where I came from and how I finished. Getting offered a spot on a team to play college basketball next year really puts things in perspective because I can’t say that being a college basketball player was my childhood dream because it wasn’t even close. My dream was to have my two front teeth knocked out (because that’s what the coolest hockey players looked like) and play goalie for the Pittsburgh Penguins. It still makes me sad that I’ll never achieve that goal. And to all the people throughout the way who I’ve mentioned in this column or if you’ve even come to a single one of my basketball games, I thank you tremendously being the positive change to my life.
Powered by