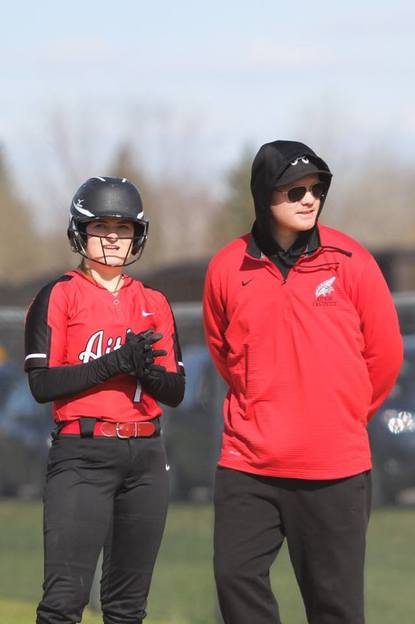 Captain Taylor Ehnstrom consulting with assistant coach Chance Goudge. Photo courtesy of Jen Ehnstrom.
By Rachael Coombs
Published May 11, 2017
​
Softball season has started which means the end of school is just around the corner. Girls softball is currently 8-5 and is having a pretty good season so far. On May 3 the girls traveled to Pine City and came out on top by a score of 13-2, with Addie Sanford hitting two home runs.

The girls played Nashwauk-Keewatin Monday on home field. They fell by a score of 5-0. “The Nashwauk pitcher had a nasty pitch and was hard to figure out a way to hit,” said sophomore Jillian MacDonald.

The softball team has five seniors this year: Taylor Ehnstrom, Angel Tellinghuisen, Abby Bobenmoyer, Corri Sanbeck and foreign exchange student Christine Daehlen. Corri, Abby, Taylor and Angel are all returning varsity players. Corri is the main pitcher, Taylor is the shortstop, Abby plays second and left field, and Angel played second base and designated hitter until she recently broke her ring finger on her right hand. Softball’s next game is today at  home against Esko and then Saturday they travel to the Benilde-St Margaret's Tournament.

Varsity captain Angel Tellinghuisen said, “I think we are doing very well, this team has a lot of potential. We haven’t quite gotten the hang of our full potential. Sometimes we lack and fall behind in the first couple innings, but then we find somewhere to get back into the game and that's where we reach our peak and exceed our potential as a team.”

Varsity Captain Taylor Ehnstrom also added, “I think overall we are doing good as a team. We have a very young team with not as much varsity experience but we have done a very good job of overcoming that and playing as a team and learning from each other. We always say ‘Ohana’ and we take being not just a team but a family seriously. We have overcome some unique situations together and we never give up, which is something I really love about this team. It has been a really fun season so far and I have gotten to know girls better, which makes the experience more fun. It has always been a pretty cool and special experience to be able to play with my sister in my last high school sport season. Even though we may be young, we have so much potential and it’s just a matter of girls believing in themselves and knowing they are good enough and I believe we can play any team and be successful the rest of the season and going into playoffs.”
Powered by