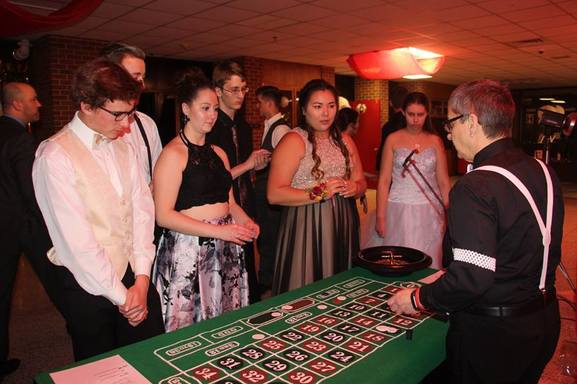 Ms. Andrea Del Zoppo stood in as a roulette dealer for the Casino side of prom.
By Zack Simonson
Published May 10, 2017
​
With school wrapping up to its final month, students, particularly the class of 2017, look back at prom with fond memories. Endorsing the Casino Royale theme, everyone put their best suave looks and attire on and enjoyed the activities, dancing, and food. Cue the James Bond impressions.
​
Leading Aitkin’s prom committee for the first time, students are in agreement that Mrs. Tetrick and the committee did a stellar job, with some senior students claiming it was the most fun they’d had at prom. The prom committee decided to bring back the titles of Prom royalty, including king, queen, prince and princess.

“I think overall it went pretty well,” Tetrick said. “We had prizes and games, and it was fun to see everyone dress up. It looked like everyone had a good time. The students seemed happy with it. I mean there were a few minor hiccups, but after it was all said and done everyone seemed happy and there weren’t any real problems.”

At $35 a ticket students had high expectations, and they would be met. Students involved seemed to come to the consensus that the food, activities, and memories made had proven it all worth it. Several students complimented the food, praising the pasta served for them that included some quality chicken alfredo and bow tie spaghetti with meatballs. The only complaint from the students was the time that went by before the food was ready.

The students were allowed to mock gamble and get chances to win prizes, including two Instec cameras going out to Silas Berg and Jack Gravelle, gift cards won by Kenny Hesse and Peyton Berg, and the giant mystery prize revealed to be 32 inch flat screen T.V. that was won by Angel Beaufeaux.

Aitkin’s Gobblers seemed mostly content with bringing the royalty back, as evident with the Prom Committee’s decision. The final votes revealed the 2017 royalty with Taylor Crotty as Queen, Jacob Hagestuen as King, Brynn Wilson as Princess, and Jaren Johnson as Prince.
Powered by