May's class is for the birds (and fish) 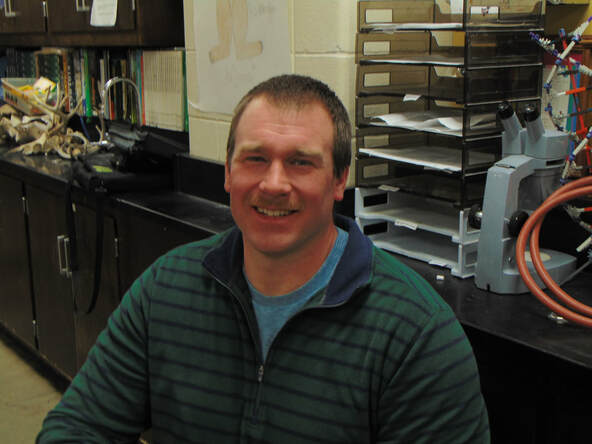 Mr. May has taught Ornithology/Ichthyology for 13 years.
By Timothy Schwietz
​Published April 5, 2019

If you’re looking for a fun elective class to take, look no further than Ornithology/Ichthyology taught by Mr. Jason May. Ornithology is the study of birds while Ichthyology is the study of fish. Out of the 19 years that Mr. May has been teaching here at Aitkin High School, 13 years have been dedicated to teaching this class. When asked why he enjoys teaching the class his face brightened and he responded, “Cuz when you say the names Ornithology and Ichthyology you just feel smart. It’s nothing but word roots, Greek and Latin word roots. ‘Ornis’ meaning bird, ‘logos’ meaning the study of, and ‘Ichthys’ is Greek for fish.”

Mr. May prefers to teach seventh grade as the main part of his teaching career, but also enjoys the one period when he gets to see some of the faces he met in seventh grade grown up a bit more. Mr. May prefers to have a class size of 12-15 students. In Mr. May’s opinion, going one to one with computers hasn’t changed the class much. If anything, it has hurt it by giving the students more to be distracted by. The elective was quite recently close to being cut. They wanted Mr. May to teach a new 10th-grade biology class, but they gave up on the idea when Mr. May offered to increase the number of grades that could take the class. Previously only 11th- and 12th-graders could take the class, but now 10th-graders are allowed to take the class too.

Some of Mr. Mays favorite memories from the class are when they went fishing for teachers and when they used to go on a big field trip to the Rice Lake Refuge. Mr. May is accepting of all students and believes that no one who wants to take the class should miss the chance to take it. If a student were to take the class, they could expect an in-depth look into roughly 10 different birds and 10 different fish presented by your fellow classmates. Mr. May enjoys teaching the class because he likes to offer a class that is less stressful than a normal class.
Powered by