Profile: Walking in the mind of Andrea Hanson 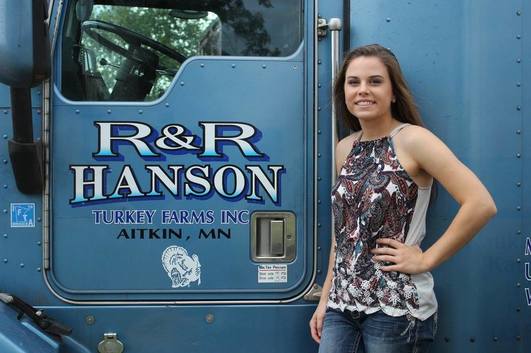 ​Andrea Hanson is an 18-year-old high school senior living in Aitkin, Minnesota. She grew up on the last of many turkey farms in Aitkin County and is very involved in local agriculture. When she was 16 she purchased her first Charolais heifer and planned to start a herd of beef cattle with another heifer when she was 17. She is a very grounded girl who likes to stick to her roots. Hanson grew up with her sister with special needs and with no immediate cousins to work on the farm, she had to grow up fast.

Andrea is very involved with local barrel races and horse shows, traveling many places during the spring and summer, and has met many new friends through the horse world. She got her first horse when she was 12 and her second a year later. The starter horse she obtained is still hers today. Hanson lets the old pony named Charlie roam the yard regularly and occasionally goes with to barrel races, even though he is retired. Andrea’s second horse was trained solely by herself in her backyard. Over the last five years they have traveled many miles, winning many classes and placing at state events.

“It was the hardest thing I have ever done,” says Andrea, “but it was a big life lesson to me and I wouldn’t be the person I am today without that horse. I think everyone should experience what I went through. It makes you a stronger person.”
​
Hanson plans to study Agricultural Education in college at the University of Wisconsin River Falls, and minor in animal science and journalism. She also plans on competing with the rodeo team at intercollegiate rodeos. Andrea plans on going into the ag industry after college and hopefully landing a job with an agricultural magazine or working for a corporate company such as Cargill or Monsanto.
Powered by