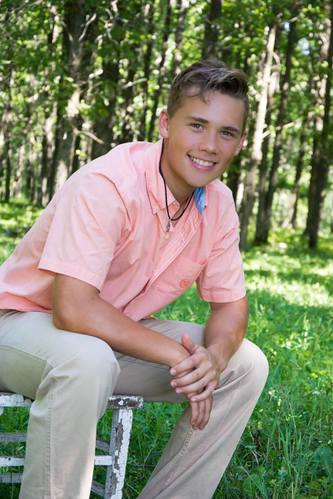 A name in Aitkin that will last forever. A loving and caring role model. A leader in all areas of his life. A man that when people hear his name will think sports, but there are many more great qualities that he possesses.

Samuel Peterson is an all-star on the football and baseball field. He was captain and the district offensive MVP despite having an injury in football. Also captaining the baseball team, Sam resides at shortstop with a nearly perfect fielding percentage and bats third in the line up. He shows leadership through hard work and persistent effort. He also cares for teammates and gives them pointers while at practice or in a game to improve themselves and the team.

​Peterson isn’t only a leader on the fields. He is in the Peer Leader group at Aitkin High School and shows his mentee how to act in school and how to improve his work ethic. Sam says, “No matter what people say about you or what you do, the decisions you make are yours and they can either be positive or negative.”

There are also flaws in Samuel as there are in every human being out there. After a breakup and the death of his grandfather, Peterson went into a depressive state. He had trouble laughing at jokes that he had laughed at before and wasn’t smiling like he had in years past.

​Samuel went through a tough time but is coming out of it. He hangs out with his friends and puts other people first to help fill voids that he had lost. “Things like this happen to everyone once or twice in their life, but it’s the reaction that shows your true character,” said Peterson when asked about that point of his life.
​
Peterson will be playing high school baseball for the rest of the spring season despite his injury in football. Then, Samuel will be playing for Aitkin’s own Steam team in the summer. He will also be umpiring baseball games and attending school at the College of Saint Scholastica in the fall, hoping to play baseball there.
Powered by