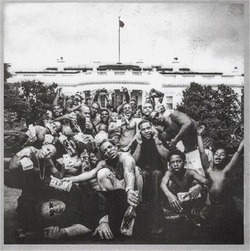 Pictured is the album cover. Click to be redirected to the Spotify stream of To Pimp a Butterfly.
By Eddy Simonson
Posted April 24, 2014

If you are familiar with West Coast rap superstar Kendrick Lamar, then you are probably aware of his recent album release, enigmatically titled “To Pimp a Butterfly.” It’s hard to be actively involved in listening to new and popular music without hearing Kendrick’s name pop up in the conversation. Known for his distinct vocal deliveries and his hit 2012 album “Good Kid, M. A. A. D. City,” the buzzed-about California rapper has taken the hip hop community by storm. “To Pimp a Butterfly” is Lamar’s third studio album, following up the aforementioned record “Good Kid, M. A. A. D. City” in 2012. It was projected to be released on March 23, 2015, but because of a mistake on Interscope Records’ part, it was officially released on iTunes and Spotify a week earlier than expected, on March 16, 2015. The album has received rave reviews on many album review platforms, most notably a 9.3/10 on Pitchfork and a 10/10 from The Needle Drop and Spin Magazine, with many music critics hailing it as a “masterpiece.”

I didn’t know what to expect when I first listened to this album. Featuring production from some of my favorite artists, Flying Lotus, Dr. Dre, Pharrell Williams, and Thundercat, I had hoped for the best. Let me just tell you this right now; this album is an experience. With my knowledge of Kendrick’s prior catalogue, this album was a massive departure from his previous efforts in terms of musicality, but somehow, he has managed to keep his style and sound consistent. This album is jazzy. I’m not talking about that boring stuff you hear in elevators; I’m talking about REAL jazz. It makes you feel alive. Aside from the jazz, the album is very pleasant on the ears and primarily funk influenced, featuring the trademark guitar and bass licks that move and dance around energetically with upbeat drums behind them. Another thing I loved about this album is the overall fearlessness of Kendrick’s vocal delivery, often changing voices and the flow of his words. This album is energetic, lively, vivid, funky, and very cerebral. It will excite you for sure, and it will (most likely) put a smile on your face.

I’ll be blunt; this record fits my taste in music, but it’s not guaranteed to fit yours. I could definitely see it being difficult to get into for somebody who isn’t familiar with or a fan of hip hop, jazz, funk, or experimental music. Kendrick Lamar was already probably my favorite rapper and one of my favorite artists in general, so I guess I was going to really dig into this album no matter what. I can only say this: my expectations were shattered completely. I had no idea how much of a roller coaster ride this album would be and with such an amazing concept and vision behind it to boot.

The coolest thing about this album is the lineage of hip hop influence that went into it. A major concept of the album is derived from the influence that legendary deceased West Coast rapper Tupac Shakur had on Kendrick Lamar. Kendrick has publicly stated that the original title of the album was going to be “To Pimp a Caterpillar,” which is an acronym for 2-P-A-C, or 2Pac, which was Shakur’s stage name. Throughout the entirety of the album, at the end of every few songs, Lamar performs a spoken word poem, repeating what he has already said and adding a little bit more each time. By the end, he reads the entire poem, and you find out that it was written to Tupac. Interestingly enough, as the album closes, Kendrick has managed to splice together an old interview that Tupac did, with the original questions replaced by Lamar’s own questions for Tupac, regarding his worldviews and philosophies. What is really amazing about this is that the conversation sounds real. The fluidity of it is insane. It is mind blowing how relatable Tupac’s responses and ideas are, considering there is a twenty year time difference. Society, and the world in general, has not changed as much as we think it has since Tupac was alive.

I’m not going to bother with an arbitrary rating for this album, as taste is purely subjective, however, I would definitely say to give this album a try. Listen to it all together, in order, in one sitting. It will surely provoke socially-aware, conscious thoughts, and you will likely not regret it. I predict that this album will go down in history as one of the greatest musical accomplishments of our time.