Jaskowiak to teach in Saudi Arabia

School board votes 4-3 to deny his leave request 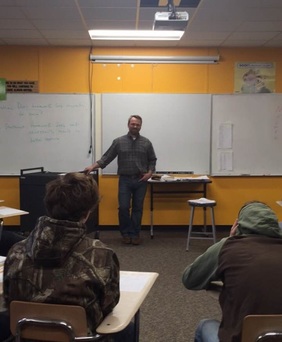 Mr. Jaskowiak has decided to go on a two year teaching expedition to Saudi Arabia with his wife this coming August. This is an opportunity that the two of them are looking forward to and is a once in a lifetime experience. They are both hoping the opportunity will expand their horizons and better their teaching methods.

Mr. Jaskowiak asked the School Board for a two year leave of absence to go on this teaching expedition and then return after the two years to his current job. The School Board had some concerns with the leave, bringing up things such as the trouble of finding a teacher that would accept a teaching job of only two years. The Board was also worried about Jaskowiak deciding not to return to teach after the two years, leaving them teacherless. They brought up that this had been a problem with a past pair of teachers who had requested a leave to teach in a foreign country. Others say that this was not a problem and that one of the positions was cut when those teachers had returned. The School Board had a vote and the decision was quite divided down the middle with the end result being three members for and four members against. “I could have reconsidered one year but not two,” said Dennis Hasskamp when asked about the issue at the last school board meeting.

Many members of the community were saddened by the decision as Jaskowiak, or better known to the school as ‘Skov,’ is a much beloved teacher at Aitkin High School. When different people around the school were asked what they thought, most people said they disagreed with the decision and think the future students will suffer as a result. Many teachers believe that Skov has given a lot to the school and deserved this leave of absence. Skov sent his letter of resignation to the school the next day.

The request to have a leave of absence is written in the contract of every teacher in our school district. It states in Article XI, Section 5, Subdivision 1 in the teacher contract that “A teacher, upon written request, may be granted a leave of absence without pay, for a period of up to five years.” It goes on to say that “Leaves of absence for periods of more than 10 days must have prior written approval of the School Board.”

The request for a leave of absence is not uncommon among educators. Many teachers from the Brainerd School District and many other districts around us go on leaves of absences overseas and are welcomed back with open arms. Taking leaves of absences help teachers get a broader perspective on their subjects and bring the knowledge back to the students.

Some members of the School Board are not pleased with the decision. Cindi Hills said, “I was in support of his leave for a variety of reasons. It’s allowable under his contract, it would have been a great investment in his education and in turn benefit the experience of the students, and his college classes have a big financial impact for students.” She went on to say, “It would have been the right thing to do and I’m disappointed in the decision not to approve it.” Jeremy Janzen agreed with Hills in these statements. However some board members believe they had made the right decision. “Everyone keeps talking about the benefit of the students in the future, but what about the students now?” said Hasskamp.

Everyone has the right to their opinion on this issue. No matter what side you are on everyone can agree that Skov is a fabulous teacher and just an amazing human being. He is caring and very intelligent. The students of Saudi Arabia are lucky to have this wonderful  teacher for the next two years even though the future students of AHS will never get the privilege to know him. With that being said all of the students who have had him and all the staff who have gotten to work with him all these years will dearly miss him. When he comes back you may see him around the town but it is a shame it won’t be waving hello in the third floor hallway. Now the Board has the challenge to find someone to fill his position because as everyone in Aitkin knows, nobody will be able to fill his shoes.
Powered by