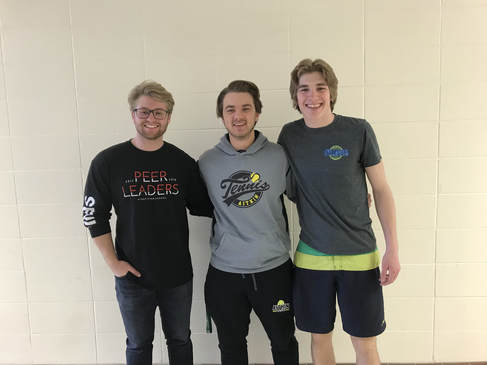 Which sport here in Aitkin do you think has the most college athletes? Most people wouldn’t guess tennis, but about half of the college athletes from Aitkin are tennis players. The Aitkin tennis team has had to be creative this year by practicing in the gym. The tennis team lost five seniors last year and three varsity starters. The team was the second seed in the section last year . This year is off to a tough start based on the weather. The Aitkin tennis team will start their season today in Virginia at their indoor facilities.

The captains this year are seniors David Curtis, Tucker Schwartz, and Jaren Johnson. They are all returning varsity players who started on the team last year. The tennis team has 24 players grades 7-12. Coach Waldorf said the team has set some goals for itself.

“The No. 1 goal of every year is to win more than you lose,” Waldorf said. She continued by saying another goal “is to be the best team in the end.”

Practice has been interesting through the first weeks for tennis. They have been inside like all of the spring sports, but tennis is tough to simulate without room. The tennis team has played pickleball, badminton, and hand tennis. This the longest that tenis has been inside since 2013. Coach Waldorf said that the team can make up for the lack facilities with their athletic abilities.

“I feel bad for all the spring sports,” Waldorf said. “It is such a short season and in the end we are going to try and be the best team. I feel for all the kids in the state of minnesota, but It will get nicer.”
Powered by