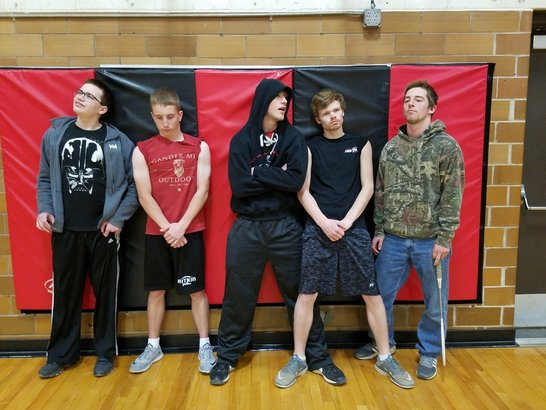 Last Thursday and Friday the BB Mountaineers traveled to Brainerd, MN to compete for State Knowledge Bowl. The team tied for 20th out of 24 teams that were in their class. The first day the teams took a written test. Afterwards, they had a formal dinner with all 48 teams that were competing in the A and AA classes.

“After a night of merriment we had five oral rounds which we persevered through,” senior Eli Provost said. “I thought it was a great experience and a lot of fun. It was an eyeopener and I think we learned a lot about Knowledge Bowl and ourselves.” Senior Caleb Curtiss said that he played a lot of Town of Salem and watched movies when they were not competing.

Lucas Wickstrom evaluated the team’s performance. “I think that we achieved a slightly below average score on the written test, which set us up for a poor second day,” he said. “The competition was overwhelming, and we certainly learned an important life lesson. It wasn’t really about placing, it was about making memories.” His brother, Levi Wickstrom, said, “I think that we might have done better if we were able to use our actual team name, not just Aitkin. It gives us confidence when we perform.”

The team had a record season for Aitkin, winning conference and placing the highest that any team from Aitkin has ever placed at state. The previous record for Aitkin at the State level was 21st place. The team bonded over the entire season, allowing them to perform at their highest ability and play with their hearts, not just their minds.

“We ended the season sprinting across the line, not walking,” Jacob Hagestuen said. “I look into my crystal ball and I see my experience in Knowledge Bowl bringing me farther in life than I can possibly imagine. I am forever grateful to my teammates and coaches. It was a humbling experience.”
​
Hopefully the Knowledge Bowl program can continue to grow in the coming years. The head coach, Jason May, has optimism for the future. “The program has grown a lot since I first started coaching and I hope that it will continue to grow,” May said.
Powered by