Welcome to the Addams Family 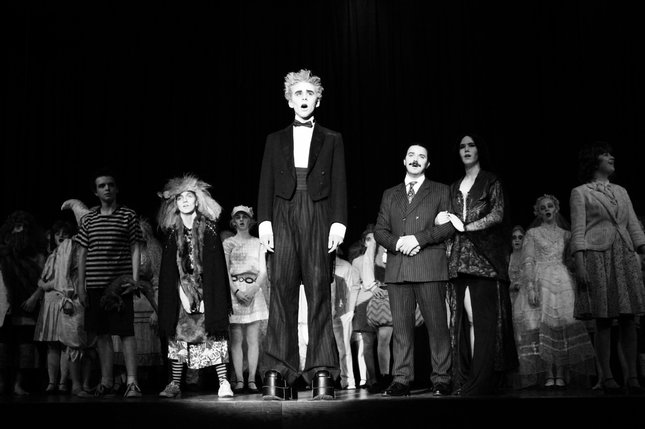 Aitkin High School’s musical team manages to bring the laughs that the original show “The Addams Family” was famous for. With great leads, singing, and ghastly humor, The Addams Family manages to be the best Aitkin musical I have seen. The story centers around the coming together of two very different families: The Addams being a dark, macabre-loving family, and the Beinekes a more traditional, nuclear family from Ohio. Shenanigans ensue as the culture of these two families clash and they humorously find themselves at odds. Wednesday (Bethany Kinzer) meets a boy named Lucas Beineke (David Curtiss) and they plan to get married. Gomez (Tucker Schwartz) is the first to find out and he must choose between keeping his daughter’s secret and telling his wife Morticia (Nikki Courtemanche), who he has never kept a secret from.

Wednesday and Lucas plan a dinner with both families at the Addams house to break the news. Gomez, while distraught over losing his daughter, wants to host a good dinner to make his daughter happy while keeping his wife in the dark about the marriage plans. As the night drags on the Beineke parents Mal (Caleb Curtiss) and Alice (Hannah Bliss) feel more and more estranged by the Addams, leading to a game at dinner where truth is spilled and both families are left hurt and ready to leave. In the end love wins out and the families come together stronger.

Everyone involved put a lot of effort into the production, from the actors, to the singing, to the background props and scene setups. Being a person that rarely laughs externally, I was taken by surprise as some of the jokes had me genuinely cracking up. One scene in particular had the whole audience laughing as Gomez loudly exclaims Ohio being a swing state when he learns that’s where Lucas is from, much to his discontent. Another funny scene was the contrast between Alice’s sunny behavior and love of happy poetry and Morticia’s love of death and darkness. Morticia was especially upset when she sees her daughter wearing a yellow dress and scolding her for it, not immediately realizing Alice is wearing the same dress.
​
Everything went right without a hiccup. The only complaint being one scene seemed to have some mic problems, making it hard to hear, but it was fixed almost immediately. The cast performed six times altogether making this musical a memorable one.
I would rank this musical 4.5 out of 5 coffins
Powered by