Officer Ryan a welcome addition to the Aitkin School District 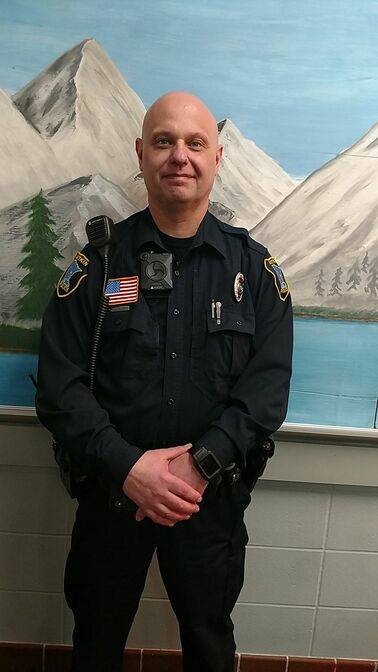 Paul Ryan was born in Duluth, Minnesota and moved to Grand Rapids when he was four. Paul was raised in Grand Rapids and grew up with his two sisters. He graduated high school and went to Bemidji State starting out as a chemistry major. “And now I’m a cop,” Paul states, finding humor in starting as a chemistry major. Paul graduated from Bemidji with a major in criminal justice and a minor in sociology.

He likes to be addressed by his first name because if he is on a first name basis with someone, then that person should be able to address him as Paul. “I don’t like it when doctors address me by my first name," he said. "If they want to be referred to as a doctor then they can use my full title as well.” Paul is married to his wife Lisa and they have two daughters, Kayla (18) and Melana (14), with a family dog named Coco (7). When asked if he has any strong political beliefs, Paul says that he is a strong supporter of the 2nd Amendment. Some of Paul’s hobbies include hunting, shooting, and “jeeping” (A self-coined term involving riding around in jeeps). Over the years, Paul has owned nine jeeps in total, “and only five Jeep Wranglers.” One of Paul’s favorite weekend activities includes going out West to go prairie dog hunting. His favorite food would be the kosher salami pizza at Sammy’s Pizza in Grand Rapids. When asked about his favorite book, Paul recalls the last book that he read, which was ‘Lord of the Flies’ by William Golding. Paul’s favorite quote is by Ronald Reagan, “You can run but you can’t hide.”

“Ronald Reagan was my hero as a kid and still to this day I would consider him the greatest President,” Paul said. He has traveled to Italy, England, Canada, the Bahamas, “pretty much all of the states,” and noted that he hasn’t been to Hawaii.
​
​Paul Ryan currently serves as the Aitkin School Liaison Officer. “I’ve always enjoyed helping people and that attracted me to (my career) more than anything else,” Paul said. “I enjoy my job and I still get to help people.” Paul says that he likes socializing and that the most rewarding part of his job is talking with students. “I’m normally a very social person when at work,” he said. “I look forward to it.” He says that the hardest thing about being a cop is stress. Paul states that they have their downtime and high-stress time and it can be hard to switch between those two extremes. “It helps to talk to other cops,” he said. When asked about his most embarrassing moment as a cop, Paul laughs and recalls the time he almost drowned trying to swim after a boat that was being blown away from the trailer it wasn’t connected to. “I almost drowned because I was too embarrassed to call the game warden. I won the horse’s (butt) award in 1994 for that incident” (An award that is given to the officer that did the stupidest thing that year).