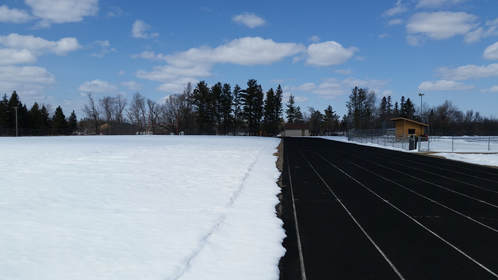 Spring sports are struggling with weather complications this year. (Photo by Trevon Pietz)
By Trevon Pietz
Published on April 10, 2018

The track and field season is underway during this cold spring season. This season there are 44 kids in total, which is more than the previous season. Varsity however is lower than last season by roughly 10 kids. Track is open to grades 7-12. This year’s coaches include: Boys head coach Adam Carlson, girls head coach Ava Carlson, and junior high coach Jason Long.

The track captains this season are J.D. Cline and Jessica Shaver. Shaver is one of the only athletes to make it to sections last year and she is returning this season hoping to go to sections once again.

Track is a very versatile sport and Head Coach Adam Carlson assures that there is something for everyone. Just to name some of the many activities one can participate in would take more than one good breath. A few of the activities students can participate in include: Discus, shot put, long jump, dashes, distance running, hurdles, relays, and the list goes on and on.

I asked Carlson how the coaches place students in their respective positions. “First we’ll find out who wants to do what and then go from there,” he said. “So if we can have three spots for boys and three for girls for each event, except for the relays which need four, then we’re good to go.” Carlson remarked that athletes are not forced into any position that they don’t want to be in and that they get to choose. Of course they recommend positions, but it is largely up to the student athlete.

Varsity practices are Monday through Friday from 3:30 to 5 p.m. When asked what Carlson would like to see the Varsity to accomplish this year, he said, “I would like to see improvement. Sometimes bodies change and that’s fine, as long as they’re playing and having fun.”

The athletes have been practicing in the gym as a result of the cold weather. Carlson said that they’ve had to do this in previous seasons, but not in a long while. Track and Field is still open to new recruits, however, one must attend 10 practices before they can participate in any 1 of the 4 events of the season.

The coaches encourage the athletes to attend two or more of the events of the season. Mr. Carlson has some advice to those undecided. “I would ask someone who has been in track before,” he said. “We don’t force anyone to do something they don’t want to do, and it’s up to them. Even if they don’t place in an event, one tenth of a second on a run can make a difference.” Hopefully the weather will warm up in the near future, so the team can take to the running track.