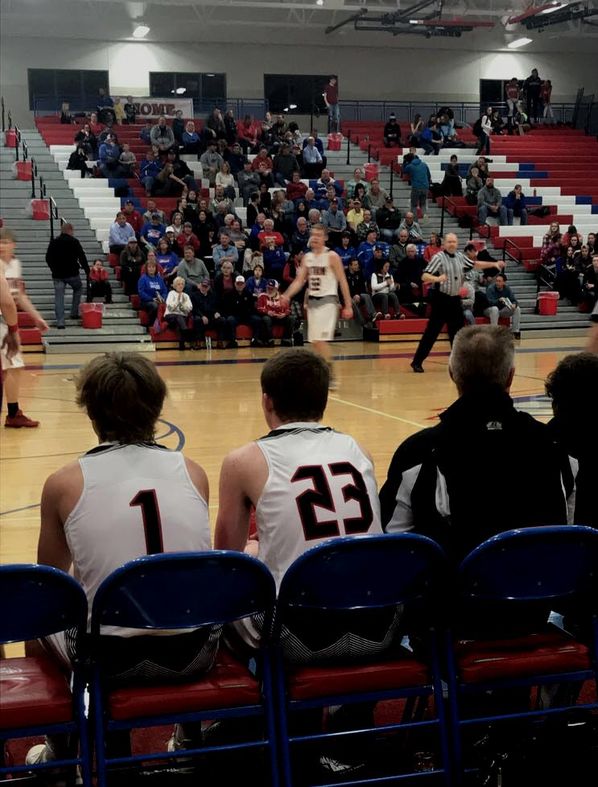 Zak Peterson and Kade Hopperstad take a break on the bench in last nights game.
By Kayla Thompson
Published March 12, 2018

The Aitkin boys basketball team fell to the Pequot Lakes Patriots 70-41 in the Section 7AA game on March 6. With Pequot being the No. 2 seed and Aitkin sitting at No. 7, Aitkin knew they had a tough game ahead of them. Within the first minutes of the game, Aitkin got a slight head start on the Patriots by 2 points but couldn’t keep up. By the end of the half Aitkin was down 35-21.

With minutes left in the game, seniors Hunter Moe, DJ Haasken, and David Curtiss were taken out of the game. The Aitkin crowd stood to applaud them on their hard work this season and in their high school career. Senior Zak Peterson also said goodbye to his high school basketball career at the end of the night.

“It still hasn’t really hit me that we’re done,” said Moe, “I knew I was done but it didn’t feel like I was.”

In the end, Pequot beat the Gobblers 70-41 and moved on to play No. 1-seeded Barnum in the Section 7AA quarterfinals in Duluth Saturday. Barnum defeated the Patriots 69-59 and will take on Virginia Tuesday night.
Powered by