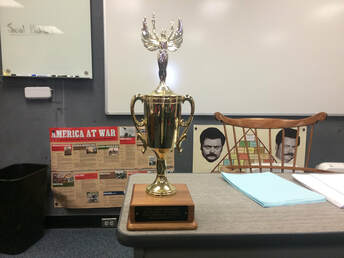 By Levi Wickstrom
Published March 6, 2019
​
This year Mr. Scott Miller is entering a team in the Econ Challenge for the first time since 2014. He has been unable to enter since then because econ has been taught in second semester only, so people would be in the middle of learning it when the econ challenge started.

The Econ Challenge is a series of tests designed to challenge students’ economic understanding and reasoning abilities. There are four members on each team and in the first two rounds they each take a written test. The first test is on microeconomics and the second is on macroeconomics. The top three scores from each team are added together for a team score for the first two rounds. The third round the entire team works together to answer questions on national economics and current events.

The regional competition is being held at St. Scholastica in Duluth. The top team there will go to the state competition at the Federal Reserve Bank in Minneapolis. This year’s team from Aitkin consists of Ramsey Moe, Sarah Curtiss, Cody Snyder, and Quinn Miller. They will be going to the regional competition on April 20. Aitkin won regions in 2005 and 2013, but has never won state.
Powered by