Girls basketball moves on at sections 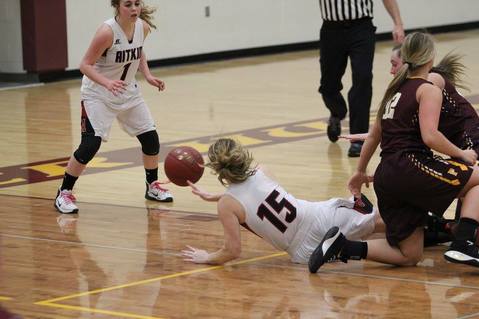 Ehnstrom dives for a ball in the 40-27 section win versus Pillager. (Photo courtesy of Jen Ehnstrom)
By Nick Smith
Published March 3, 2017

The No. 5-seeded Aitkin girls basketball team played their first playoff game of this season on Tuesday. They played against the No. 4-seeded Pillager Huskies and ended up with the win by a final score of 40-27. Jillian MacDonald said, “I think that the team didn’t play the best that we could have.” The first half was low scoring and went to halftime with the Gobblers leading 14-13, but after the half, the team started making more shots and playing better.

Naomi Lane led the Gobblers with 10 points while MacDonald scored eight and Taylor Ehnstrom added seven.
When asked if there was anything the team needed to do to prepare for the next game, Macdonald said, “The team needs to improve on keeping our head up and focusing on what we are doing out on the court because Esko is a beatable team.”

Ehnstrom said, “We just need to play defense as good as we did on Tuesday and have better communication and we will do fine.”

One thing MacDonald said that she would miss the most about this year's seniors is, “the criticism that they give me and how good of friends we all have become.” She also thinks that the upcoming girls on the team will do great together for the next couple years because they have played together for such a long time that they have created a really good bond with each other. Senior captain Taylor Ehnstrom said, “The whole team has created a great bond with each other and they are a very talented group of girls.” One thing Ehnstrom will miss the most about not playing with this team next year will be that she and all the other players have created really good friendships and she’s going to miss it a lot.

​The girls will be playing No. 1-seeded Esko at the University of Minnesota-Duluth at 7:15 p.m. Saturday and would like to have your support at the game. 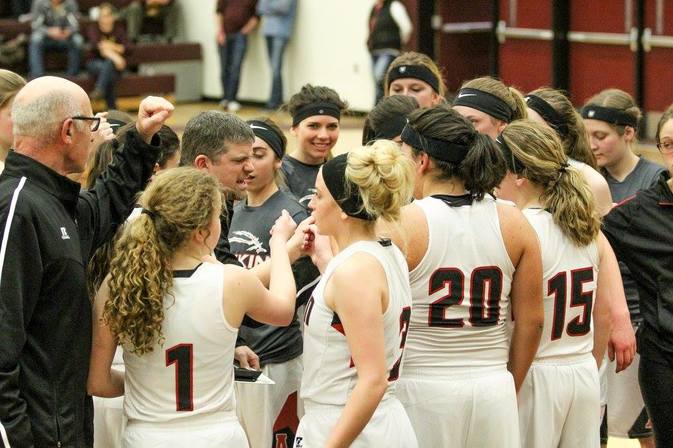 The team huddles up during a timeout against Pillager. (Photo courtesy of Jen Ehnstrom)
Powered by