Novak retiring after 12 years in Aitkin 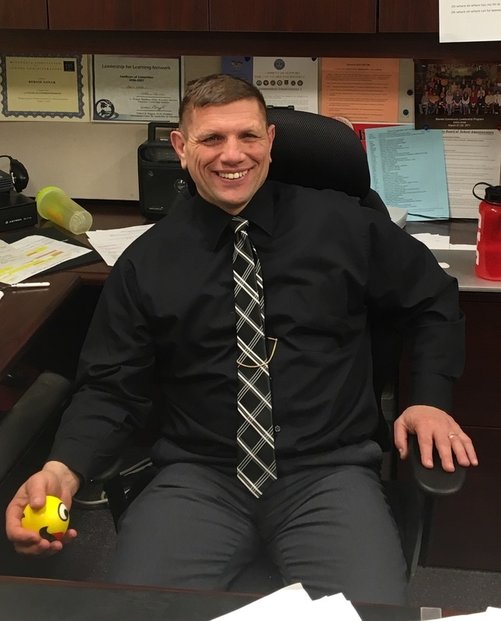 Mr. Novak is retiring after 12 years at Aitkin and 35 years in education.
After twelve years of superintendent work, Mr. Bernie Novak will be retiring from the Aitkin School District. The 57-year-old has been in the education business for 35 years and has really enjoyed the interaction with students and staff. “That’s why I went into education … to better the lives of students,” Novak said.

Before coming to Aitkin, Novak started teaching at the age of 22. He taught at an elementary school in Montgomery-Lonsdale, was the head wrestling coach, and was the assistant coach for football and track. Then Novak got a new job at St. Michael-Albertville as a teacher and assistant wrestling coach. He worked there for 13 years before moving to Ashby, where he was the superintendent and elementary principal. He worked there for six years, still striving for his goal of bettering the lives of students.

After being at Ashby, Novak moved to Aitkin to be superintendent. He says that he will miss working with the students and staff the most. He won’t miss the late night meetings, meeting unfunded mandates, and conflicts that arise during a normal day at work.

Novak has five children: Nathan, Lindsey, Sarah, Isaac, and Jared. Nathan is 31 years old and a teacher at Pequot Lakes High School. Lindsey is in the banking business and is 30 years old. Sarah is a veterinarian at the age of 27. Isaac is 23 years old and is studying to be a Physical Education and Health teacher. Jared is 19 and is going to St. John’s University to become a nurse. Jared also wrestles there.

His plans for retirement are to hopefully do construction work with a nephew of his and some substitute teaching. He also wants to hunt and fish more, as well as biking and traveling. The main thing that Novak likes to do is spend time with his seven grandchildren and he will be doing a lot of that.