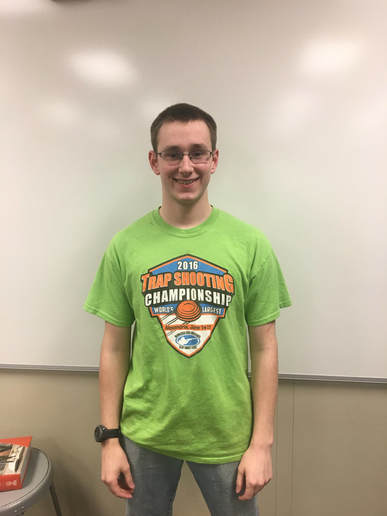 Trevon Pietz, member of the Birdbusters. (Photo by Kassidy Pietz)
By Jaren Johnson
Published on March 27, 2018

Trap shooting is a sport that you can letter in here at Aitkin High School. Many people didn’t know we offered this sport and as Saige Arnold said, “I had no idea we had a trapshooting team, but that’s pretty cool.”

From our school this year we have 14 people participating on the trap team. Since there are very few members, Aitkin combines with two other schools — McGregor and Cromwell — to make a trap team.

The name of their team is called M.A.C. Birdbusters. The Birdbusters have been competing in the Minnesota State High School Clay Target Shooters League since 2011. In fact, they even won the state championship that year.

The team has started to grow over the years, starting in 2013-2014 when they began shooting in the fall and spring leagues. There are over 40 shooters grades 6-12, both male and female, participating in the spring/fall leagues.

Trevon Pietz, a member of the trap team, says he hopes to see more kids take advantage of the state qualifying tournament because it's free of charge and anyone who wants to go can go. The only limit is a sign up limit.

As their spring league season is approaching fast, let’s recognize this team and wish them good luck and success.
Powered by