Gobbler girls gear up for softball 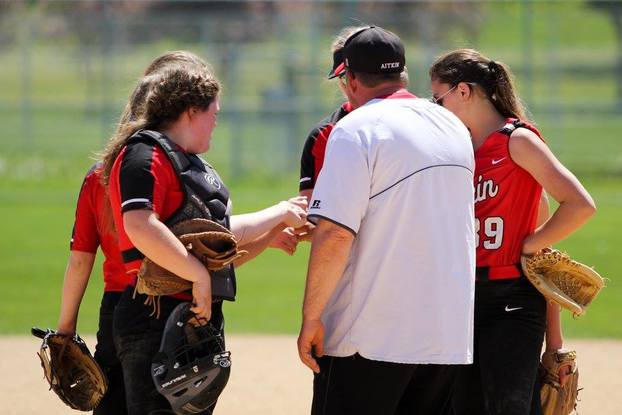 As spring comes closer, you can hear the sound of bats hitting softballs in the gym after school which means another softball season is starting soon. The girls of Aitkin Fastpitch gear up for another season. Their first game this season is scheduled for April 9 at Ogilvie.

Coach Jason Henke says, “Last season we were in a lot of close games with good teams. This season we would like to convert them to wins.” Henke has been the softball coach for three years. When asked why he coaches softball he compares it to a play. “Have you ever seen a perfect relay throw to home to get somebody out?" he said. "It's a thing of beauty.

"We are working at becoming better softball players and good people.”

Last season the girls were 10-11 and the team is hoping on improving their stats this season with more wins. The girls want to become one as a team and work together all the while bettering themselves as softball players.

Allison Ehnstrom was the only eighth-grader on varsity last season. “It was difficult not having a ton of people I knew well to talk to, but having my sister on the team made it really nice for me,” she said. Softball is a sport that teaches the players about working together to create a better team.

Jillian MacDonald is captain this year and she says, “I want to be a better leader on and off the field and help the younger girls who haven’t had much experience.”

The girls and coaches really want to improve themselves as individuals and as a team and want to get better every day. Stay tuned to see how amazing these ladies will be.
Powered by