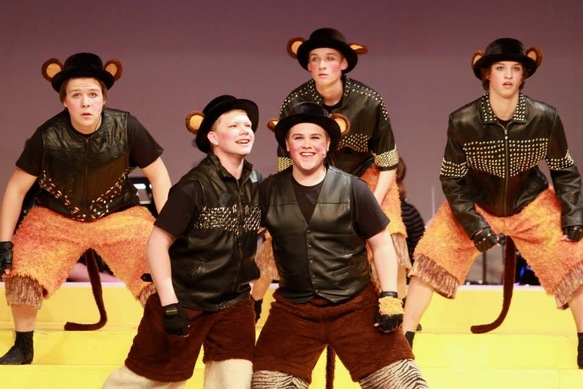 Its that time of year again when the Aitkin Concert Choir puts on their annual musical and this year it will be “Seussical!” It is based on the Dr. Seuss books: Horton Hears a Who!, How the Grinch Stole Christmas, The Lorax, Green Eggs and Ham, Yertle the Turtle and Other Stories, Horton Hatches the Egg, I Had Trouble in Getting to Solla Sollew, McElligot’s Pool, Hunches in Bunches, If I Ran the Circus, The Butter Battle Book, Oh the Things You Can Think!, The Cat in the Hat, The Sneetches and Other Stories, Did I Ever Tell You How Lucky You Are?, Oh the Places You’ll Go!, and One Fish Two Fish Red Fish Blue Fish.

The Cat in the Hat serves as the narrator for the play, which is a combination of many of Dr. Seuss' most famous works. Musical Director Mrs. Blake said, “The Cat in the Hat tells the story of Horton, an elephant who discovers a speck of dust containing Whos, including Jojo, a Who child sent off to a butter battling military school for thinking too many "thinks." Horton's attention to the speck of dust and his "loitering" care of Mayzie LaBird's egg has elicited taunting and accusations from the rest of the animal kingdom, except for Gertrude McFuzz, who longs for his attention, and JoJo, whose "thinks" save them all in the end.”  The leads have been practicing since January and the entire cast has been practicing since February. Mrs. Blake says, “It is a fantastic musical with parts for everyone. This is a fun, imaginative show so please encourage all of your friends and family to come see it. They will love it.” This year the musical will be performed on March 25th-28th at 2:30 pm on March 25th and 7:30 pm on March 26th-28th. Tickets to the musical are on sale now in the high school district office. Ticket prices vary from $6.00-$10.00.

The cast consists of the entire concert choir, and leads are: