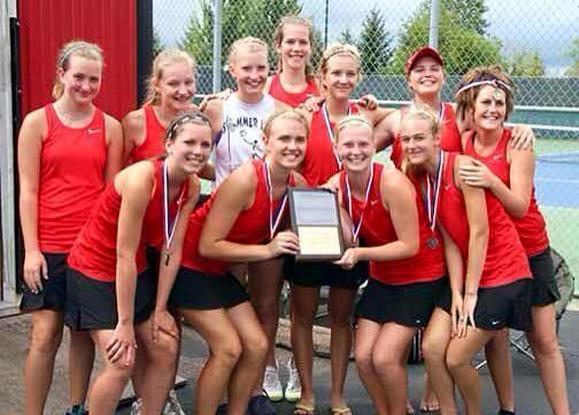 This week’s athlete of the week is senior Lisa Anderson. Lisa is a multi-sport athlete where she is active in tennis and basketball. As a captain in both sports, she is very competitive. Lisa's final record for tennis was 23-8. She was 10-3 with Lydia Browning as a partner and 13-5 with Marissa Kinzer as her partner.  For tennis she was named All Conference. Lisa and Marissa Kinzer were conference champs in doubles, she received the MN State High School Coaches Association Academic Gold Award, and she was the Grand Slam team winner for Determination and Dedication.

For basketball Lisa averaged 7.2 points a game. She also averaged over 3.5 assists per game. Lisa finished her final basketball season with a record of  18-7.  She was also named an all-conference player in 2014.

Lisa’s favorite part of athletics is being competitive and she loves to be aggressive on the tennis and basketball court. “My team is the reason I’ve grown as a player,” she said. “Without the people I’ve had on my team since I began varsity back in eighth grade, I would not be the player I am now.”

Lisa has been a captain for both tennis and basketball for two years now. She leads on the court and off. “I am very aware that all of the decisions I make either have a positive or negative repercussion on my team, so I lead by example by making the right decisions.” Lisa’s goals motivate her. She has strived to achieve goals since she was little, from personal goals to team goals. She said, ”Trying to be better than I was before motivates me. There is always room for improvement.”

Lisa has spent a lot of time in the gym and on the court to become the athlete that she is today. Tennis coach Ms. Waldorf said, “Lisa is a phenomenal athlete. She had the complete package as a senior with quickness, strength, agility, great hands, positive attitude and confidence. Off the court Lisa is a complete leader.  She is an extremely hard worker, very responsible, intelligent and someone who knows what they want each and every day and she doesn't let anything hold her back from achieving what she wants.  She is very kind and considerate and knows exactly what is expected of her and goes above and beyond those things.”

Waldorf also noted that Lisa used to get frustrated and angry when she was younger and that led to poor results. “Finally in her senior year she became a complete player adding a very tough mental game to her already amazing game of tennis,” Waldorf said. “It was incredible to see her grow and mature into a very successful athlete, student and person over the years. She will definitely be missed next year as one of the key leaders of the Gobbler girls tennis team.”

“Lisa has a nice combination of size, strength, and quickness that allows her to play both inside and outside for us,” Mr. Williams, Anderson’s basketball coach, said. “I know how hard Lisa is on herself and she would probably say that she let her teammates down as she wanted to contribute more in the scoring column. However, she increased in rebounding and cut her turnovers down from last season, which definitely helped us this year! Lisa is our vocal leader on the floor. She calls out our defenses and often, our offense and inbounds as well. She is always checking in on girls to see how they are doing with their seasons. It has been a privilege to have a young lady like Lisa represent our program so well over the past four years. She will be greatly missed!”

After high school Lisa still has yet to decide where to attend. She has been accepted into nursing programs at various different schools. She says that right now she is leaning towards going to the University of Mary out in Bismarck, N.D. Lisa was talking to the head basketball coach at Viterbo University in LaCrosse, Wis. but decided that she did not want to pursue college athletics. She said that she could always join if she ever changes her mind. Lisa also said, “I hope to play intramurals wherever I decide to attend.”
Powered by