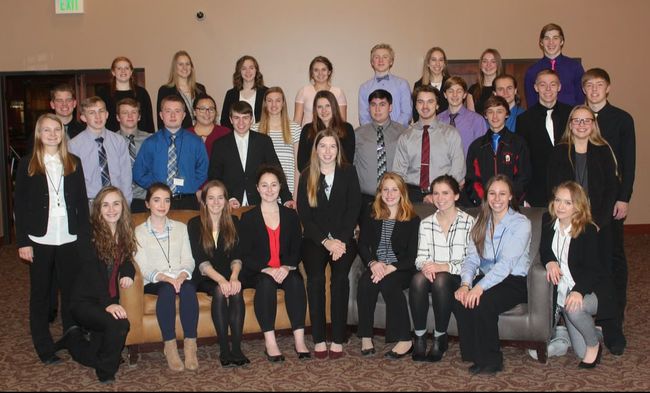 Aitkin BPA students attended the regional contest on January 17. The group wound up with many students placing in individual and team competitions, which led the way to the state competition March 8-9.

It was an exciting season for everyone in the group and they went into competition ready to give it their best effort.
​
“As a team we challenged the students to do better — that it is more important to better last year’s performance,” assistant coach Mrs. Teri Larson said. “The rookies did a great job and the returning team members were better prepared to give it their best this year. We had 31 students compete at the state level this year.”

The two months between the regional and state competitions was filled with hours of each individual preparing and perfecting their presentations.

“The students need to be prepared to do well,” Larson said. “It is their responsibility to be ready to compete. As coaches, Mr. Miller and myself are there to answer questions, review materials, offer suggestions and point out to students where they can find important resources to assist in the preparations for competition.  The students did a good job of preparing and being prepared this year.”

When the state competition finally came around in early March, all the contestants from Aitkin were beyond excited for their shot at making it to the national competition.

“It [making it to the state competition] was exciting because this was my first year in BPA,” said sophomore participant Hannah Paulbeck. “People had told me it was going to be fun, but I had no idea what to expect.”

Although all of the competitors from Aitkin gave their best shot and were very successful, only five of the group qualified to go to nationals.

Two students, Owen Miller and Maddie Buisman, not only reached their goal of making it to Nationals, but they did so by winning first place in their category. They qualified to go to state in Video Production and the topic they did was on the importance of sleep. After talking to Owen Miller about making it, he said he was extremely surprised and shocked. He also said, “The whole season was a lot of fun and a lot of work to get things done and perfect.” Which only goes to show how much hard work and dedication he and Maddie put into their presentation.

“It is great that Aitkin is sending five to Nationals,” Larson said. “It was a huge accomplishment to have the freshmen duo of Buisman and Miller win the state competition as freshman.  They did a great job on their video and the trip to nationals is a great reward for them. The other students have qualified before and have competed at that level before. They are always ready to do their best, and deserve the recognition that they are receiving. As one of the coaches, I am extremely proud of these students and their accomplishments.”

The three other qualifying students — Jake Fontaine, Jacob McCormick, and Tucker Schwartz — all qualified in individuals with Jake and Tucker taking third in their categories, and Jacob taking third and fifth in his categories.

Jake will go in the category of Prepared Speech, Tucker will go in Information Technology Concepts, and Jacob will go for both PC Servicing & Troubleshooting (third place) and Computer Network Technology (fifth).

“Qualifying for nationals gives me a feeling of pride and accomplishment,” McCormick said. “The highest I had ever placed at state BPA before this year was fourth place. Placing third this year was very exciting, and the fact that I placed third and fifth in two different events makes me feel like all the hard work studying was worth it.”

The national BPA competition will take place May 9-13, in Dallas, Texas. The students who qualified for the competition will get to choose if they go or not because they will have to pay an individual part of the overall fee for their trip.

“I'm very proud of everyone that partook in BPA this year,” McCormick said. “Everyone's attitude was amazing and I think everyone had fun, which is great.”
Powered by