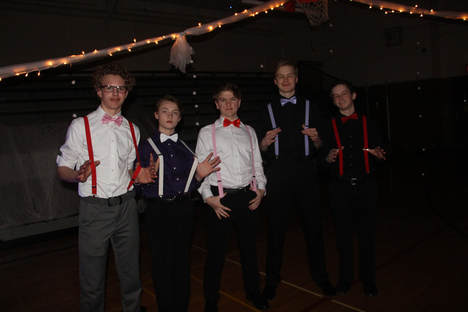 A couple weeks ago we had our annual Sno-Ball dance. Congratulations to Tucker Schwartz, who won Sno-Daze King, and Courtney Conner who won Sno-Daze Queen! Also, a big congrats to Grace Liljenquist and Cole Boyd for winning best dressed!

​Along with this dance comes the candidates and the fun spirit week. The candidates were Schwartz, Conner, Seth Nordberg, Kayla Ryan, Boyd, Liljenquist, Brady Taylor, and Alexa Seibert.

“I was kind of surprised to be a candidate because I'm not a very popular kid,” Nordberg said. “I just kind of sit on the side.”

Liljenquist enjoyed the dress up days. “My favorite dress-up day was animal day because it was a really fun outfit to put together, and I really enjoyed seeing all the other creative animal costumes.” I can’t say I disagree with her. Seeing all the costumes on animal day was definitely enjoyable!

Liljenquist and Boyd said they did not attend the dance. The rest were either yes, or gave me no response.
Schwartz said being crowned Sno-Daze King was a shock to him. “I was super surprised,” Schwartz said. “I mean, usually people never expect themselves to win, and I had already picked who I thought would win. Needless to say, when I broke the egg and it shot all over Seth and Cole’s clothes, I felt a mixture of emotions because dress clothes aren’t cheap. But I was happy, too. It was all after a week of great dress up days, and I think we all had a lot of fun. It was like the cherry on top.”

Homecoming King Jaren Johnson said he thinks things should be mixed up for the dress-up days.

“I think we should try something new because I feel like the dress up days are the same every year,” Johnson said. “I mean sometimes they come up with something new for one day, but I think we can do better.”

Madilyn Amundson was impressed with two candidates in particular, especially with their costumes for the dress-up days.

“I voted for Grace and Cole,” Amundson said. “I thought they tried really hard every day, and it was good. And kind of funny.”

David Curtiss said he was impressed with the games the candidates played on stage during coronation. “I thought it was different,” he said. “It was unique and fun.”
​
Most students seem to think that Sno-Daze was really fun this year and are excited to see what they come up with next year!
Powered by