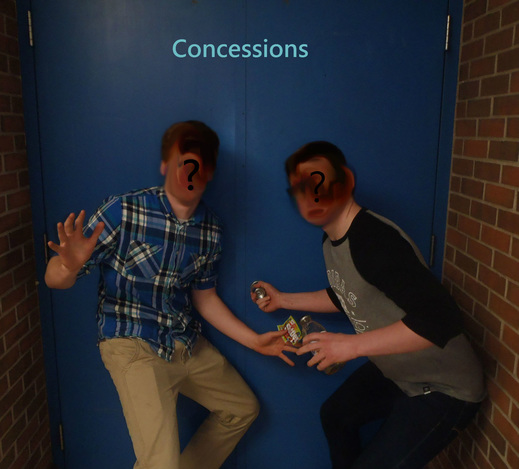 Is this a picture of the suspects being caught in the act?
By Grant Espeseth
Posted March 17, 2016

It was a moist Friday morning, coffee was brewing, and children ran around and played. The Brews Brothers were pouring coffee for the kind students and teachers of Aitkin High School. It was a normal morning, except this morning Cline was coming, and he “WASN'T HAPPY.” The Bros stopped the pouring while everyone stopped in place and watched as their morning heroes got growled at. Eyes swayed left to Cline then right to the bros. Were they being taken away for eternity? many wondered in amazement. No one knew what just happened, many don’t know what’s gonna happen to the bros. Will the doors be closed?

Trouble is ahead for the Bros, it's the scandal of the year, and fear is in the hearts of the students of Aitkin High School. No one wants to speak about it, no one wants to look into the scandal except for one bright, young, smart journalist. That journalist went into the heart of the school to find the scandal and bring it back down to earth for ears to hear. I am that writer who fought for this information to be released, the “Edward Snowden” of journalists.

It all started when the Brews Brothers were accused of stealing from the concessions stand, where the Brews Brothers call home and sell their French coffee. People are trying to shut them down due to accusations of thieving. The Bros would be nothing without the concessions; if the door shuts on them, then their legacy will be taken from the pages of the history books, crumpled up, and thrown in the trash. People like Johnny Fairchild call them “guilty, mean, and thieves,” while others like Gina Turner call them “innocent, caring, and nice.” These people don't know the whole story there, the pawns of the school only able to move one step at a time. While words like “innocent” and “guilty” are being thrown around, no one stops to say “fair trial” or “justice.” Will justice prevail?

I got down and dirty in research, first talking to the head honcho of the Brews Brothers, some say he created them. The head honcho is Danny Christian, and he had a few words to say. First he pleaded the fifth to the date of the incident, that's when I knew I was in for a show. “Will this be the end of the Brews Bros?” I asked.

“Do you get along with all of your employees at the shop?”

“For the most part, except the ones of the ginger race,” said Danny.

“How many pops were stolen?”

“That number was not given to us,” said Danny.

“I'm confused why you would steal from this great school?”

“For free pops, wouldn't anyone steal for their brothers in arms?” said Danny.

“Do you know who stole the pops?”

“We don't know, but maybe one of us,” said Christian.

“Who accused you guys of this heinous crime?”

“Mr. Cline came to us about the issue,” said Danny.

“I love him, check that, we all love him,” said Danny.

“Why would Mr. Cline do this to you?”

“He was worried about his concession stand,” said Danny.

“What words do you have to say about this whole scandal?”

“Customer service is our No. 1 priority, then right behind is making the best cup of coffee. There is no evidence against us stealing pops,” said Danny.

“Do you think that they will close you down?”

“No, because we love our business too much to give it up without a fight,” said Danny.

Danny put some relief on the suspected thieves being apart of the Brews Brothers. Word goes around that a person not even associated with the group went in there and took what they wanted, but this was a month to about two months ago.

The air was getting crisp and I needed new information, so I decided to talk to the head of the concessions, Mr. Cline himself. As I walked in I was welcomed with a smile. I trembled in fear but decided to take a seat. He did not want to talk much about the incident. I knew he was gonna be a hard cookie to crack. The only thing I got from him was one great answer when I asked, “Are you trying to shut the doors on the Brews Bros?” He looked up astonished by what I had just asked him. As I waited there I noticed a small grin as he said, “No, I'm not trying to shut the doors down on the Brews Bros.”

After the answer I knew that the Bros still had a chance to plead for their innocence. I knew Aitkin High School would cry tears of joy for their heroes. I skipped in joy as I left Mr. Cline's office, the best coffee shop in town lives on. Mr. Cline is really cool, and probably the best sports director Aitkin has. He means no harm to the Brew Bros. Mr. Cline is not blaming the Bros, but he does have his suspicions.

The next day I was kicked in the butt by the brown cow. Word was out that I had information of the scandal. The head of BPA, Mr. Miller, the owner of Danny Christian himself, heard of what I knew. My khakis instantly changed to a darker brown. What was I in for? Was my paper on the line to be ripped and thrown away? It was my duty to report to Mr. Miller by myself, with nobody by my side. I knew that I wasn't going down without a fight. As I walked in Mr. Miller's room the warm air brushed my face, it was hot. I took a seat, but while I sat I looked into Miller’s face, which was showing the look of confusion and hate.
I said, “Mr. Miller I need to know what you know about the scandal.”

“What scandal? I don't know anything,” said Miller. I knew he wouldn’t say a thing, I knew that I couldn't crack him, only Chinese-style torture could do that to Mr. Miller.

As I walked away I said, “Sorry Mr. Miller, that's all I need,” which wasn't true because I needed everything he knew, and I knew he was covering up for the Bros. He turned to me and said, “That was the worst interview I have ever done.” My face looked astonished, did he not know who he was talking to, the Mona Lisa of journalists? He then said that he was gonna email my supervisor, Mr. Henke himself. He was trying to tarnish my name, my life, my soul, and even my big heart, which shrunk that day. I walked away amazed by what just happened, but I knew that this story had to be published.

The Bros coffee shop still stands, but many speculate if it will last any longer. All the Bros want is to be found innocent, they want a fair trial. Until that happens, the Bros need all their supporters to rally for them. You can find the Bros selling their coffee every morning Monday through Friday from 7:30 am to 8 am, for only $2 a cup. They care only for their customers. There is only one question to ask, “Will justice prevail?”
Powered by