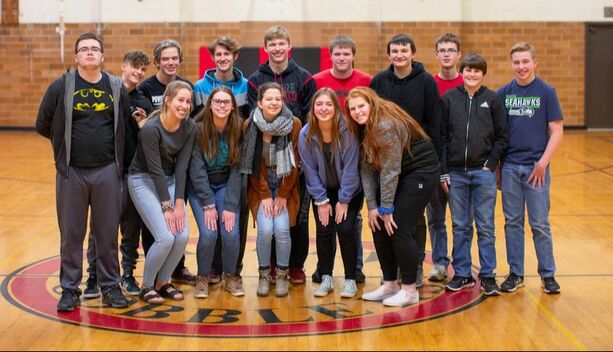 Aitkin High School Knowledge Bowl went to sections on Friday, March 1 marking the end of Knowledge Bowl this year. Knowledge Bowl consists of teams of 3-5 answering questions in a 15 second time period. Knowledge Bowl is essentially a team-based trivia game. The coach would ask a question and if any of the teammates knew the answer, they would hit the buzzer and if they were right, the team would receive a point. The time length of these competitions is around half an hour to 45 minutes.

Some of the Knowledge Bowl seniors are sad to leave the club as they graduate. “Most of the clubs at school are sports that I neither like nor am I good at,” Levi Wickstrom said. “Knowledge Bowl was something for me to do and it was fun. I really enjoy it.” Wyatt Carlson added, “I’d say Knowledge Bowl is a great way to hang out with friends and take a break from school while still testing my intelligence.”

As Knowledge Bowl moves on to another year without the seniors, there are some expectations as well as current potential. Mr. May said, “I’m looking forward to next season because we’re graduating some important seniors. As long as the kids are having fun and making memories, it’s mission accomplished.” Some of the seniors also have expectations. Jacob Kukowski said, “I think there are some expectations that some of the younger students should do better than us seeing as there were some underclassman groups that did really well this year.”

The underclassmen are also very excited for next year. Gillian Wickstrom, Cinneididh McIntosh and Hannah Paulbeck all plan on joining Knowledge Bowl again next year. “I’ve always enjoyed Knowledge Bowl and I’ve been in it since ninth grade,” McIntosh said. “I want to continue.”

Hannah Paulbeck was really proud of some of the underclassmen this year, proclaiming that “You shouldn’t judge a book by its cover. The ninth-graders this year ended up being really good this year and nobody expected it.” Many of the teammates suggested that trusting your teammates and listening to your friends will gather more points in the long run.

Mr. May, one of the coaches, is also a large topic for memories with stories about not noticing the one-cookie rule and taking multiple as well as giving into the students and letting them convince him to go to Buffalo Wild Wings on their last day. Landon Goble recalled, “Mr. May came up to us and told us that he didn’t see the sign telling him to only take one cookies and accidentally took like six of them.”
​
The Knowledge Bowl teammates are glad to have fun and display their intelligence while getting out of school. Although they disagree with the one-cookie-ruling at meets, they always manage to have fun.
Powered by