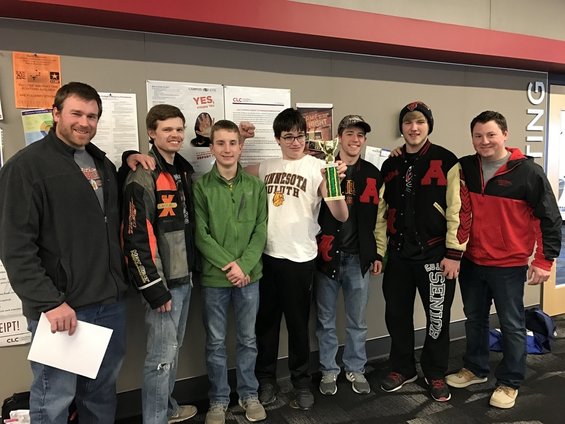 The BB Mountaineers headed up to Staples CLC on March 9 for a chance at knowledge bowl sections competition. The team was ranked 7th after they completed the written round. They started out the oral rounds fighting their way slowly towards a top 5 seed in the final rounds. The BB Mountaineers fought their way into fourth place in the region of more than 80 teams, giving them a spot at state. The team will be heading up to Brainerd at Cragun’s for The Knowledge Bowl State Competition April 6-7.

“We did well to make it to state but we are going into state without expectations and just to have fun,” Eli Provost said.

The team has four seniors who are Provost, Caleb Curtiss, Jacob Hagestuen and Lucas Wickstrom. Their alternate for the competition will be sophomore Levi Wickstrom.

“They totally belong there but here is the thing that is shocking about it: Typically it is the Brainerd show,” Mr. Sean Smith, one of the Knowledge Bowl coaches, said. “They had to make the small school rule so that one of the four teams (going to state) had to be a small school. We’re usually fighting all the other small schools to be the fourth team. This year it was three small schools and one Brainerd team so that’s pretty cool. It’s like a small school revolution.”

On Feb. 22 the A.H.S. Knowledge Bowl Teams headed down to Rush City for a chance at the Great River Conference title against Isle, East Central, Braham, Hinckley-Finlayson, and Rush City. One of Aitkin’s teams, the BB Mountaineers, started out well in the written round but ended up in second place. They then started to make a comeback in the first oral round and came out on top after the oral round. They then went through the rest of the day making their lead bigger every round. At the end of the day when it was all said and done, the BB Mountaineers were Great River Conference champs by a 10-point lead.
Powered by