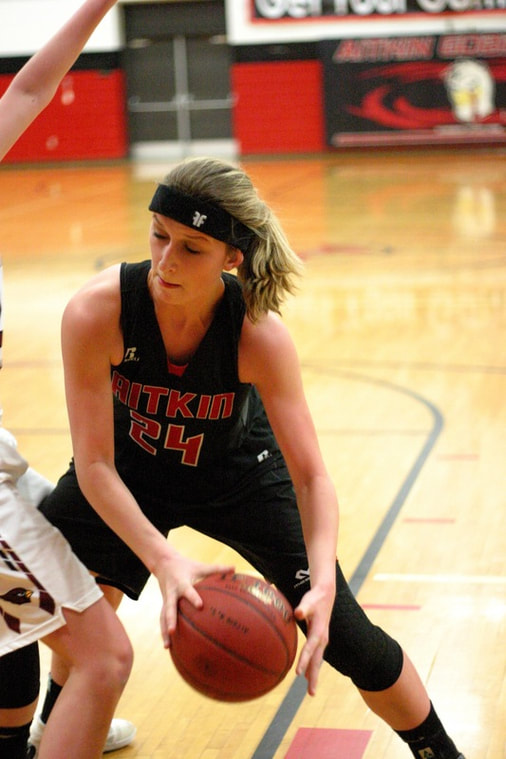 Kaija Davies moves towards the basket in a game earlier this season. (Photo by Henke)
By D.J. Haasken
Published March 13, 2018

The Aitkin girls basketball lost last Saturday night to Esko in the section semi-final, which was ultimately the last game of the season for them. They ended the game with a score of 50-45. Despite not playing their best basketball game of the season by any stretch, they had their heads in the game for the duration but just could not get over the hump to take the win.

The girls finished their season at 19-9, a one game improvement from last year’s 18-10. Though the Gobblers did have an impressive season, they are still not completely satisfied. “I knew we had the potential to win sections and advance to state if we put our minds to it,” said junior forward Kaija Davies. It’s amazing that despite the 19 wins under their belt, they really feel as though they could’ve done better this year and even had a shot at competing at state.

Besides the Gobblers success as a team, they also had some individual milestones along the way. Maggi Fellerman eclipsing her 1,000th point and Head Coach Rob Williams getting his 200th victory were all part of a very memorable season for the Lady Gobblers.

“I see a team that is seasoned and ready to fight for a chance at the state tournament next year,” said Davies looking ahead to next year. “We all have good games and bad games and that's what makes us so strong. Everyone that gets put on the court can score.”

Providing a prelude to next season Davies just had this to say, “2018-2019 is our season.” A confident statement from a budding star. We’ll see if that can prove to be true for the Gobblers when their season returns.
Powered by