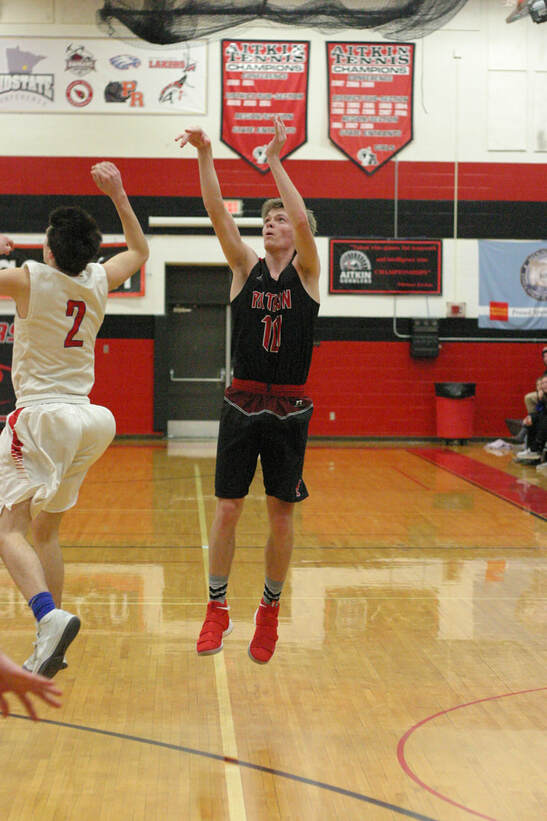 Garrett Westerlund puts up a shot during a game against Pequot Lakes earlier this year. He scored 29 against Two Harbors Thursday. (Photo by Kaija Davies)
By Kaija Davies
Published March 1, 2019
​
The Aitkin boys basketball team defeated the Two Harbors Agates 74-57 on Thursday night to end their regular season. They played with a fire and determination to come out with a win.

Garrett Westerlund came out leading the Gobblers with 29 points to help take down the Agates. Jake Kukowski also added to the win with 12 points. At half time the score was 40-36. The boys were 12-of-17 at the free throw line. “The defense in the second half is what made the difference in the game holding Two Harbors to only 21 points,” Head Coach Kerry Hopperstad said.
​
The boys ended their regular season with a record of 7-18.

”One of the highest points of the season was the effort at the Virgina Tournament to get the win against International Falls,” Hopperstad said. “The competitiveness against Virginia but falling short of the win is another highlight of the season.”

The boys program had set the goal of improving at the beginning of this season. New assistant coach Scott Stanfield has been teaching the team to understand how to run a read and react offense and play pressure defense.

The boys will be heading to Esko to start the section playoffs on Tuesday, March 5 at 7 p.m. Esko is the No. 1 seed in the section and Aitkin is seeded No. 8.

Hopperstad believes to succeed in this next game the boys have to play as a unit and have shut down defense. “We also can’t give up offensive rebounds and we absolutely have to make our shots from inside and outside,” he added.

Captain Nathan Hagestuen agreed that to succeed in this game, the Gobblers need to communicate and make their shots.
Powered by