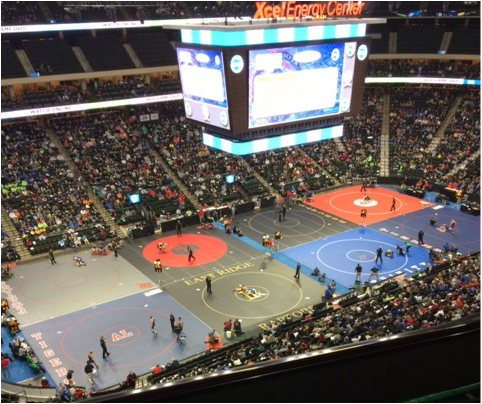 Aitkin Gobbler Noah Landrus wrestled in the Class A State semifinals Saturday, Feb. 28 at 160 pounds where he was defeated by Paden Moore by an 8-1 decision. Moore went on to defeat Brad Kroll by an 8-3 decision to win the state tournament. After being defeated by Moore, Landrus took on Nicholas Esping of Minneota. Landrus defeated Esping by a 6-5 decision. This took Landrus to his final match where he wrestled Ted Androli for third place. After a 10-1 decision, Landrus lost, earning himself a fourth place finish in the 160 pound class.

This was his third year making it to the state tournament, and his first year placing. Landrus says while he wishes he could have finished better, he is happy to have made the podium this year.

Landrus was the only wrestler to advance through Friday's round. He defeated Tanner Schreifeis of Kimball Area by an 8-3 decision before beating Cameron Lundeen of Red Lake County Central 10-5.

Jerod Novak pinned Brady Mehr of Kimball Area at in 3:48 at 145 before dropping a 3-0 decision to Hank Friedrichs of Chatfield and a 4-0 decision to Logan Rogers of Adrian Area to be eliminated.

At 195, Alan Bast defeated Jacob Bleess of Chatfield 6-3 before falling 5-1 to Garrett Pembleton of Dilworth-Glyndon-Felton and losing 4-3 to Sam Erckenbrack of New York Mills to be eliminated.

Kyle Lynn lost at 220 by a score of 8-1 to Dillon Card of Bertha-Hewitt/Verndale and fell 1-0 to Jared Welch of Wabasso/Red Rock Central to be eliminated.

Dan Nordean fell by a score of 7-1 to Carter Wright of Wadena-Deer Creek to be eliminated.﻿
Powered by