Opinion: Give Knowledge Bowl a try 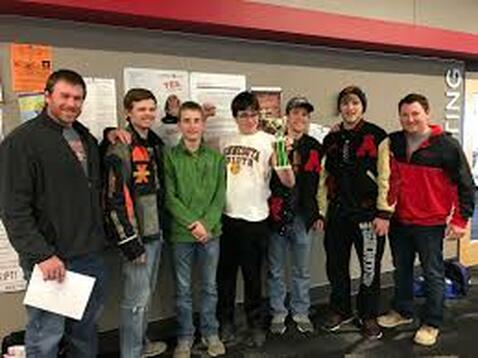 The 2017 Knowledge Bowl Team earned a trip to state.
By Levi Wickstrom
Published Feb. 27, 2019
​
I first joined Knowledge Bowl in ninth grade and it has been the most enjoyable experience I have had throughout high school. It has allowed me to build bonds of friendship and camaraderie with students who share my love for trivia. For those of you who wonder about it being fun, I have a story. I recall a time, years ago, a certain member of the team who was sitting out as an alternate asked the coach in the room if he could work on his computer. The coach agreed and said if we were bothered, we could just throw shoes at the student, upon which two other members of the team immediately took off their shoes and threw them.

In Knowledge Bowl, you get to answer trivia questions in a fun and healthy (but not in a boring way) environment. Your team is pitted against two others in a fierce battle for knowledge supremacy. If you’re worried about the school you would miss, fear not, for Knowledge Bowl is gone for only three to five days a year.
​
Knowledge Bowl practice starts Thursdays at 7:30 in the morning. Each team may have up to five members, but no more than four can compete in an oral round at one time meaning one member would be an alternate. The judge/coach reads a question and you buzz in on a strip as soon as you think you know the answer if you get it right you get a point for that question. Points are used to determine what teams you compete against and who wins after the final round. As a word of advice to new members, always include units whenever mentioned.
Powered by