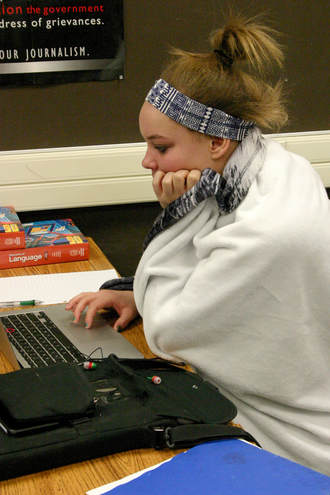 Minnesota is known for its cold climate, and that's okay, that’s acceptable. It’s a state, it’s allowed to be a little temperamental with its temperatures.  But when a school is known for its cold climates, or temperamental temperatures, it’s not anything to brag about. Often times at AHS, students will have blankets with them throughout the day, or they will keep their jackets on all day.

As Jaren Johnson says, “It gets to be a distraction. You're not really thinking about your education, you’re focused on warming up or cooling down. The fluctuation in temp is just not okay. ” It can also be a distraction when other students are wrapped up in bright, fuzzy pink blankets.

Saige Arnold says, “It’s flippin’ cold. It makes it hard for me to focus on school, because I’m too busy focusing on trying to keep myself warm.” I’m sure if you asked most other people in this school, they would say the same thing. The temperature is often a distraction, whether it’s too hot or too cold. I personally have had to wear my jacket on multiple different occasions.

Jim Bright, Aitkin High School’s head janitor, said that in 2012, we put in three new boilers which are our source of heat for the school, and that two of those boilers are running at all times. However, we did not do any work on the ducts. The air handlers, which are where the “heat goes after the boilers, were installed in 1976 when the school was built. And haven’t been replaced since.

“I have heard complaints of it being too cold, almost everyday.”

Same Jim, Same. In 2012, they also put everything on the computer. So when Mr. Bright logs into his computer, he can see the temperature of every room in the school. There are three boilers — one on each floor — that each control the whole floor.

He also said that there are some cases where there might be one thermostat for four rooms. Let’s say that in the room where the thermostat is, the teacher gets hot and opens the window. The thermostat will sense that cold air and start pumping hot air into the other rooms.

“It’s hard to keep everyone happy, because everyone has different preferences,” Bright said.
Powered by